TWIFT | Digital | PlayStation 5 Release Date: Its Specs and Other News About the Long-Awaited PS5!

PlayStation 5 Release Date: Its Specs and Other News About the Long-Awaited PS5!

While a little part of Sony fans is still waiting for the PS4 next update release date, the majority of gamers have a common question… When does the new PS5 come out? PS5 DualSense has been already revealed… And we are all tired of the long wait. Thanks to the higher powers, Sony confirmed that PS5 release won’t be delayed due to the coronavirus, so we’ll get it in time! Noteworthy, game consoles have become saviors for many geeks who are left in isolation of their own. So, we all wonder when PlayStation will evolve and we’ll see the next-gen tech masterpiece!

If you are a gaming newbie, here are some facts for you! PlayStation 5 or PS5 is the next-gen Sony’s console which release was planned to late 2020. Still, the company has demonstrated its new controller called DualSense this April. It looks completely different from its ancestor ‒ DualShock controller from PS4. Black and white color scheme together with a rather futuristic look makes fans either love or hate it. Though, ergonomic shape and impressive features ‒ adaptive triggers, haptic feedback, a microphone ‒ will certainly make you fall in love with it when playing your first game on PS5!

Taking a look at DualSense, we can suggest that the console will have a similar modernistic look.

Also, announcing the next-gen controller, Marc Cerny, Sony’s lead system architect, told the audience about the PS5 hardware. Of course, we’ll cover the details a bit later, still, we can’t stand to show you the most fascinating features! Common PS5 will be equipped with an 8-core AMD Zen CPU with 3.5GHz each, GDDR6 memory of 16Gb. A powerful GPU with 10.28 TFLOP, 36 CU at 2.23 GHz guarantees the highest quality of graphics. So, everyone who used to say ‘PS suck, PC wins’ can relax! All this is seasoned with a mega-fast SSD, ray-tracing, 4K Blu-ray player, and compatibility with a majority of PS4 games make PlayStation 5 the star of 2020! The hype around it will be extremely strong across the globe!

So, let’s get to the juiciest details about the stunning console!

What Else Should You Know about PS5?

After Sony PS5 announcement, we’ve learned not only about its crucial specs but about unique features like:

When Does the New PS5 Come Out?

Finally, it’s time to answer the main question! According to Sony, they are going to release it during the 2020 holiday season. It means we’ll see the console on shelves already in the Q4! Leaks suggest that the Day X will be on November 20, but this information is not confirmed yet.

Also, all gamers can sleep well, as Sony stated they won’t move the release date due to the coronavirus pandemic. AMD has already been reviving its production!

So, let’s wait for the official announcement of the release. As for us, it will happen in the upcoming months.

Since we have already answered the question ‘when does the new PS5 come out?’, it’s time to dive deeper into the essence… In a very early Sony PS5 announcement, they revealed the details about its specifications:

Which of These Specs Guarantee a Next-gen Gaming Experience?

As you see, Sony PS5 announcement promises us a brand new outstanding gaming experience. The times when virtual reality is as juicy as the real one are coming soon!

Will There Be a Pro Version?

Various rumors fill in the web with fans’ hopes regarding PlayStation 5 Pro. Haha, they even haven’t seen its ordinary version and are already eager to learn more about Pro! It’s all about tech geeks, indeed.

Sony neither confirmed nor denied these rumors. Though, they affirmed that they would try to do their best to meet customers’ expectations. If players want to get a more high-tech solution, let it be.

A Japanese journalist Zenji Nishikawa suggests that the Pro version will cost around $600-650. We agree this is a reasonable price for something powerful. Compared to top-notch gaming PC, the prices of which can sometimes reach $2K or even $3K, $650 for a super-fast PlayStation it is just great!

However, we assume that the launch of PS5 Pro will take place not earlier than in 2023, as previous experience shows. Sony will certainly start with its basic version first.

What About the PlayStation 5 Design?

Once again… Sony hasn’t shared any official information, so we can consider their DualSense controller! Consoles and controllers commonly have similar designs. Well, that will be very weird if everything goes another way. Just imagine PS4 with PS1 controllers.

Still, we have something fascinating to show. Here are the expected looks forecasted by several tech publishers based on the accessible public data. 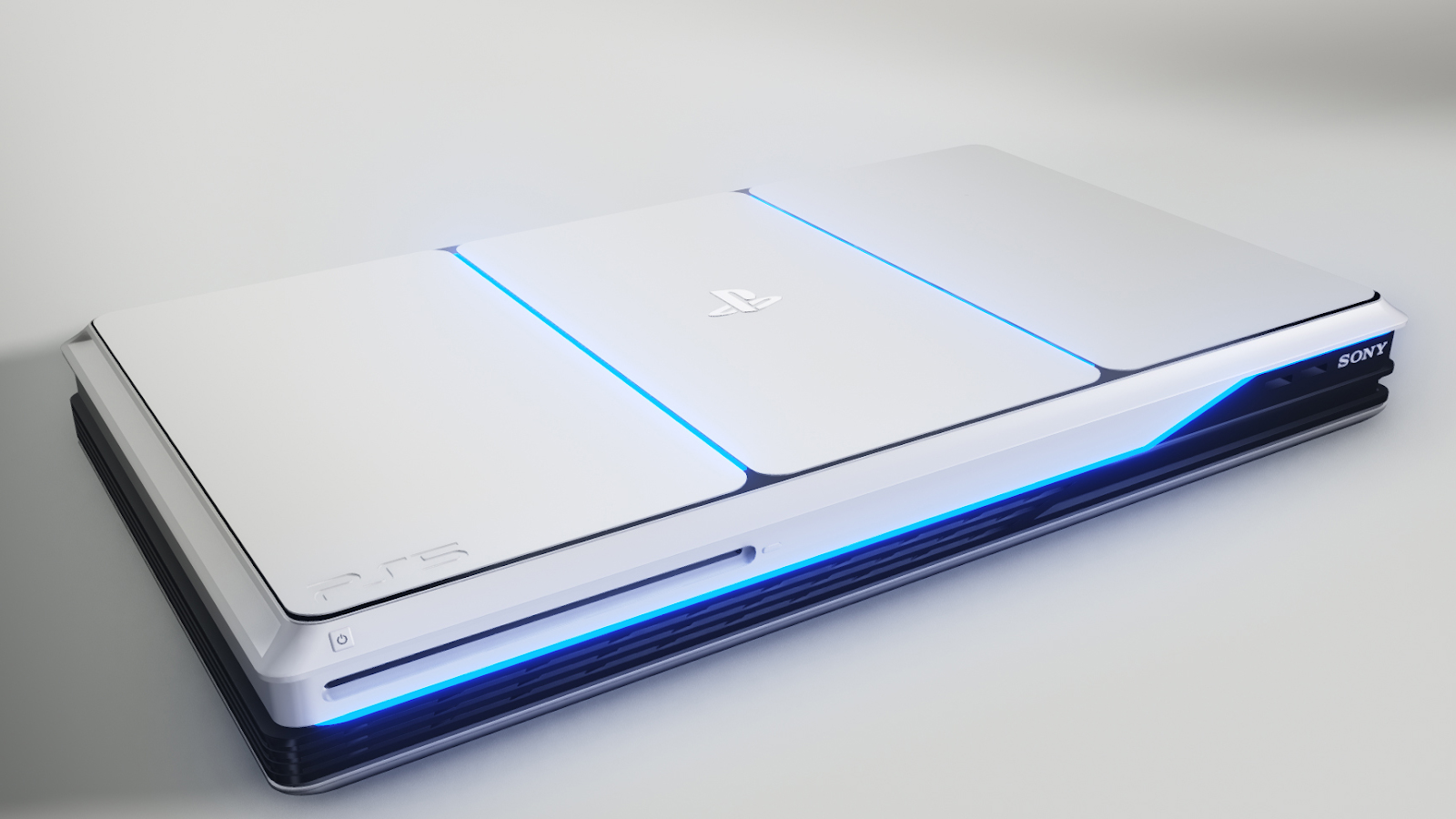 Well, we must acknowledge that they all look better than Xbox X:

We hope you’ll be able to sleep well after seeing this design masterpiece!

As we’ve already mentioned bicolor DualSense with a built-in mic several times, let’s pay more attention to it. The great news is that Sony has already demonstrated it to the public.

Though everyone expected something like DualShock 5, the company decided to bring even more innovation. The anatomy of the controller remains similar to DualShocks. Still, Sony has integrated adaptive triggers in L2 and R2 to give players a real sense of resistance and recoil, for example, as it is in archery.

Also, the Share button will be replaced with the Create button.

And one more cool thing about DualSense… It reminds you of something, right?

What About the Price?

We mentioned that PS5 will be likely to cost about $499, but these are only assumptions. Sony hasn’t calculated its price yet, according to Hiroki Totoki, their CFO. He states that it’s too early to decide on how much costs are necessary to develop, assemble, and successfully promote and sell all those armies of consoles. These unknown variables keep the company from revealing the price.

At the same time, Bloomberg said that the price will be affected by the pandemic in any case. The cause for this is time. There won’t be enough time to produce as many consoles as Sony did when launching PS4. Back in 2013, the company imported 7 million units to the US. This year, the number will be around 6 million. Still, these are also assumptions, so we’ll see…

Looking back at past releases, we can state that the price was always Sony’s strong point. Xbox One costs more than PS4. And we hope that they will continue this good tradition. The high price was the most unforgivable shortcoming of Xbox One, so hopefully, Sony won’t repeat that mistake in 2020. A too expensive console, even filled with flagman hardware, won’t make a stir among gamers.

When Will Everything Be Revealed?

Will there be a reveal event? When does the new PS5 come out? What is the PS4 next update release date? We all have tons of questions with no answers… Nevertheless, we believe the Sony PS5 announcement will happen soon!

If there won’t be a chance for an offline event due to coronavirus, the company will likely host an online event. Leaks on the web suggest this magic date will be June 4. Anyway, Sony hasn’t confirmed it yet.

To our mind, June or July sound reasonable. Even without regard to the pandemic, they are believable.

Let’s look forward to hearing the official news about the Sony PS5 announcement!