TWIFT | Digital | The legendary ‘‘Doge’’ meme sold for $4 million. Is that a new record?

The legendary ‘‘Doge’’ meme sold for $4 million. Is that a new record?

You know this meme. You’ve laughed at this meme. You’ve sent this meme to your friends. You love this meme. It’s the oh-so-popular ‘‘Doge’’ meme. The meme that’s been around since 2013 (can you believe it’s been so long) is one of the most famous memes in the history of memes and it’s a photo of a concerned dog, called Kabosu. The dog’s breed is called Shiba Inu and that’s why a lot of us started referring to it as the Shiba meme. 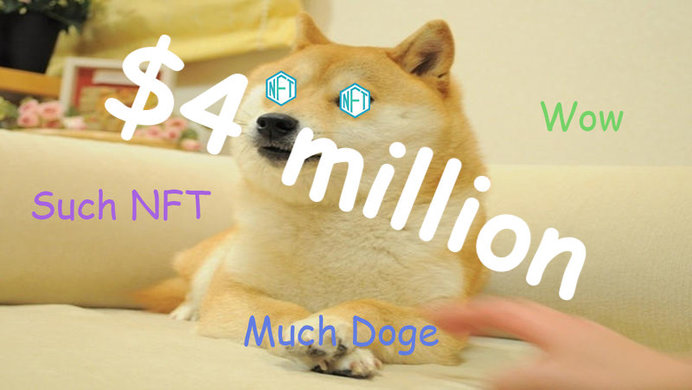 Well, this particular meme is now the priciest meme NFT to ever be sold.

‘’Doge’’, the picture of the worried Shiba Inu has become a sign of very sophisticated humor and hasn’t stopped circling the internet since its early days. Recently, however, it’s also trending for being the most expensive meme NFT (non-fungible token) sold… EVER! Its price came to a fascinating $4 million and most of us were honestly shocked. Back on 11 June, the future auction winner ‒ @pleasrdao ‒ bid 1,696.9 worth of Ethereum coins (amounting to around $4 million) to buy the ‘’Doge’’ NFT on the auction site Zora.

Don Caldwell (who’s editor-in-chief of the internet meme database ‘Know Your Meme’) stated: ‘‘We’re so happy to be a part of this milestone in internet history. If any meme deserved to be the new meme NFT record holder, it’s Doge.’’ ‘Know Your Meme’ was also the one who certified ‘‘Doge’’ before the auction to guarantee that the meme was sold by its legitimate owner. Moreover, Don mentioned that ‘‘Doge’’ has also previously won Know Your Meme’s ‘Meme of the Decade’ award back in December of 2019. He also believes that this specific meme is ‘‘one of the most iconic memes in internet history’’.

Originally, the meme was available for purchase from the 8 June by Atsuko Sato, who is the owner of Kabosu the Shiba Inu dog in the meme. The auction kept going for three more days until it was bought by @pleasrdao. And in case you were wondering, yes, Kabosu is still alive and well (fortunately) and is fifteen years old. Can you believe it? That dog is a hero. Much wow.

Because that meme is so popular and so many people want to buy it, it’s natural that there’s some tension during the bidding. While the auction was happening, a bidding war for the meme started on Zora, where the NFT was released for sale. The tension on 11 June was between the users @twodollahotdoge and @pleasrdao and the price kept increasing, however eventually @pleasrdao succeeded in getting ownership of the meme.

The name ‘‘Doge’’ roots back to the Flash cartoon ‘‘Homestar Runner’’. In it, in an episode from 2005, the main character Homestar (who the show is named after) refers to another one of the characters as his ‘‘D-O-G-E’’. Five years after that, in 2010, Atsuko Sato posted the picture of her dog on her blog and had no idea it would turn into this internet phenomenon.

Sato has shared before that: ‘‘I took the photos to update my blog. I take a lot of pictures every day, so that day was nothing out of the ordinary. Kabosu loves having her photo taken, so she was delighted to have the camera pointed towards her.’’

Once the photo was out there on the internet, it started circling Tumblr and Reddit (at the beginning of 2010) and then a Reddit user referred to the photo of Kabosu as ‘‘Doge’’, the name fit perfectly and then a meme was created.

Kabosu’s owner also commented on this: ‘‘When I first found out about the Kabosu memes, I was very surprised. I was terrified at the thought that just one photo I had casually posted on my blog could spread all over the world to places I didn’t know.’’

The meme is essentially a photo of Kabosu with her crossed paws, looking a little worried. Back when it first started to trend, the meme was funny because on the picture there’d be broken English expressions such as ‘‘Very wow’’, ‘‘doing me a scare’’ and ‘‘what r u doing?’’. In today’s world, however, Doge’s also very well known for its comeback due to our increased interest in Dogecoin (the cryptocurrency carrying the same name). Even though Dogecoin has existed for a while now, it became famous after Space X’s CEO Elon Musk started hyping it up on social media recently.

Part of the money from the meme’s NFT sale will be directed towards several charities. Some of them are the Japanese Red Cross Society and the World Food Programme.

What NFTs are, is a form of a certificate of authenticity. The NFT is a series of one-of-a-kind characters, which are then connected to a blockchain ‒ a number of computers that serve the role of a digital ledge that no other computer can later alter. It’s the same principle that cryptocurrencies such as Bitcoin use. The only difference is that bitcoins are all identical and NFTs are non-fungible (one of a kind).

NEVERTHELESS, an NFT of Doge would not act as a copyright, as confirmed by Decrypt (a website focused on all things crypto). Digging through Decrypt, it becomes clear that the NFT should be considered more like a digital autograph from the inventor of the meme, which guarantees legitimacy (a lot like a signed baseball card). Lately, the brand new hot thing is selling memes as NFT and some experts even put a name on it ‒ ‘‘meme gold rush’’.

There are also seven more photos of Kabosu, certified by Know Your Meme, and they’ve also been sold, however for much less than the OG meme pic.

One thing is sure ‒ we’ll keep loving the Doge meme and it will forever be one of the best memes out there. Regardless of how much it sells for.

Would you spend this much on an NFT?