Well, Zoom isn’t the only one we’re concerned about. This goes for all common chat platforms. They, unfortunately, still have design flaws, which tire our brain and body. The good news, however, is that there are things we can do to make the situation better.

Even though more of us are signing up for the famous video chat platform to talk with co-workers, family, and friends during the Coronavirus lockdown, Stanford researchers want us to beware: It may be exactly those video convos that make us feel constantly tired. 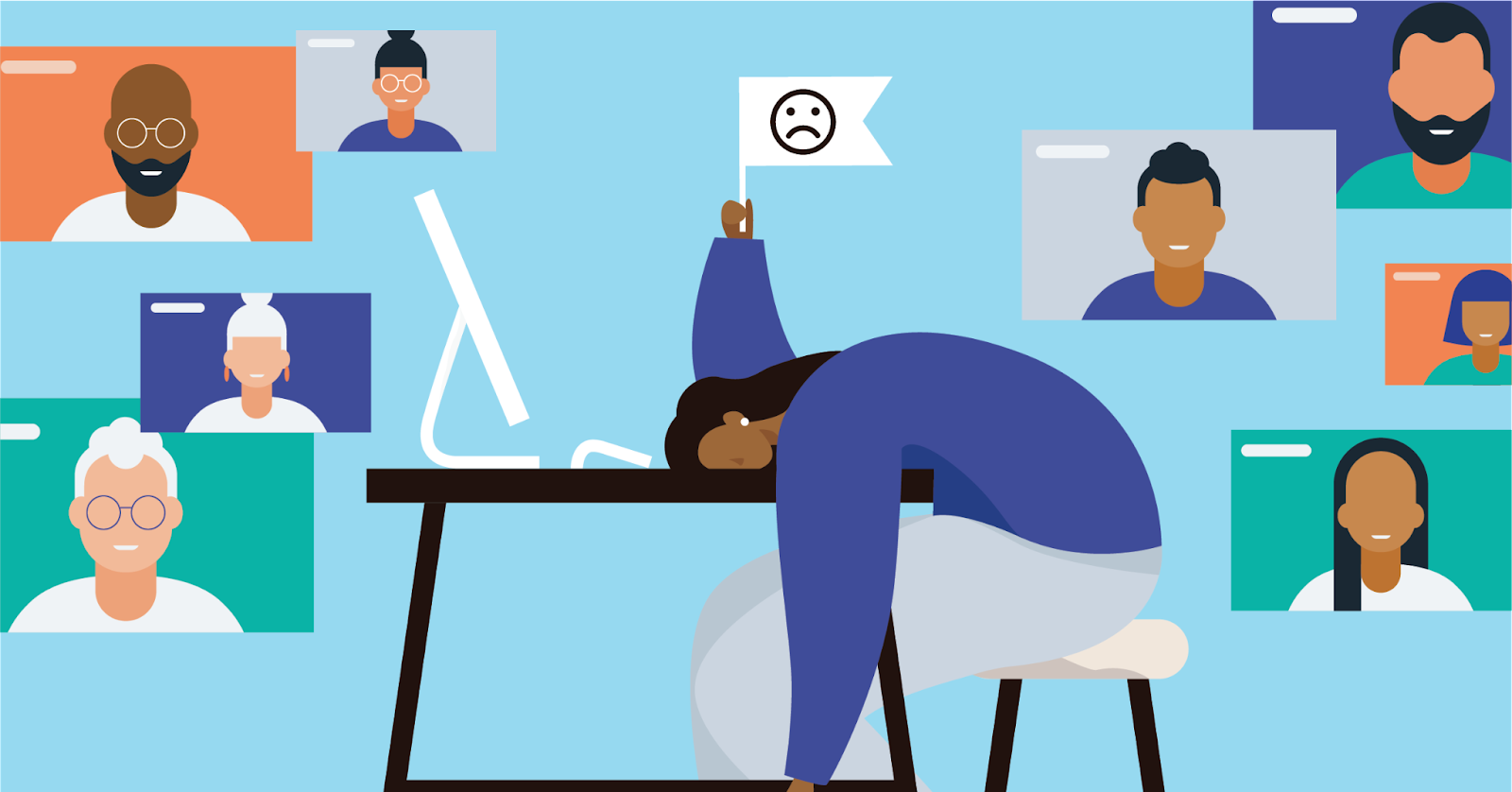 Inspired by the latest boom in videoconferencing, communication Professor Jeremy Bailenson, who’s also the founding director of the Stanford Virtual Human Interaction Lab (VHIL), analyzed the psychological effects of being on these platforms for hours every day.

Like ‘‘Googling’’ is what we call any internet search, now ‘‘Zooming’’ is what we say to refer to any type of video conversation. Virtual meetings are currently at their peak and millions of them are taking place every 24 hours, especially since social distancing requires us to avoid others physically.

In the very first peer-reviewed paper, (released in the journal Technology, Mind and Behavior back in February) which methodically dissects Zoom fatigue from a psychological standpoint, Bailenson investigates and evaluates Zoom based on the platform’s technical characteristics. Additionally, he concludes four aftereffects happen as a result of lengthy video calls, which are mainly responsible for what we now call ‘‘Zoom fatigue’’.

Professor Bailenson points out that he’s not aiming to denounce any specific video call platform but instead, he uses programs like Zoom often to emphasize how the present application of video call technologies is tiresome and proposes alterations in the interface, many of which are pretty straightforward to actualize. On top of that, he mentions recommendations for users and companies on how to use the present features on video calls to reduce the feeling of being tired. He states: ‘‘Videoconferencing is a good thing for remote communication, but just think about the medium – just because you can use video doesn’t mean you have to.’’

Here are the four causes for why video conversations tire us so much, as reported by the research:

1. A couple of hours of close-up eye contact daily is indeed very stressful.

It’s not only the amount of eye contact we are involved in on a video call that is way too much for our body to handle. The size of a person’s face on the monitor is disproportionate too.

If we were in a regular meeting, everyone would be inconsistent when looking at the speaker, writing something down, or spacing out. Nevertheless, on Zoom convos, we are all looking at everyone constantly. A listener is being treated nonverbally like a speaker, which means that even if you’re not the one who’s talking, you will still see the others’ faces looking at you. That is why the amount of eye contact has also multiplied significantly. Professor Bailenson finds that: ‘‘Social anxiety of public speaking is one of the biggest phobias that exists in our population. When you’re standing up there and everybody’s staring at you, that’s a stressful experience.’’

Another factor, which contributes to the stress, is that depending on our screen size and presence/lack of an external screen, other’s faces on video conversations can turn out to be bigger than we’d actually like them to be. The professor discusses that ‘‘In general, for most setups, if it’s a one-on-one conversation when you’re with coworkers or even strangers on video, you’re seeing their face at a size which simulates a personal space that you normally experience when you’re with somebody intimately.’’

In the real world, if another person’s face is that close to your own, your brain will probably consider that to be an extreme situation, which usually ends with either sex or an argument. Bailenson comments that: ‘‘What’s happening, in effect, when you’re using Zoom for many, many hours is you’re in this hyper-aroused state.’’

What we can do to fix it: Until the programs alter their interface, Bailenson advises to take Zoom out of full-screen and reduce the size of the Zoom window as proportionate to the monitor, to minimize face size. Additionally, you can get an external keyboard so you expand the personal space between you and ‘‘the office’’.

2. Being able to see yourself all the time (and in real-time) when you’re on a video call is very draining.

Almost all video call systems provide the caller with a small square screen of what their camera sees. That is, however, very abnormal to us as human beings, according to Bailenson. He mentions that ‘‘In the real world if somebody was following you around with a mirror constantly – so that while you were talking to people, making decisions, giving feedback, getting feedback – you were seeing yourself in a mirror, that would just be crazy. No one would ever consider that.’’ He also quotes research papers, which prove that when we’re able to constantly check ourselves out, we tend to be more critical of ourselves. A lot of us are currently working in a setting where we are enabled to look at our faces for long periods daily. ‘‘It’s taxing on us. It’s stressful. And there’s lots of research showing that there are negative emotional consequences to seeing yourself in a mirror.’’.

How to fix it: Professor Bailenson advises that systems modify their current default ways of blasting the video to both self and others, when it could only be sent to others. Until that happens, though, there is the alternative of opting for the ‘‘hide self-view’’ option (you can find it when you right-click your photo, once you make sure your face is framed correctly in the video).

Normally, when we’re in real life or on a phone call, we’re able to pace around and generally be in motion. Nevertheless, when we’re video calling, almost all cameras have a set field of view, which consequently entails that we have to be still in one position or spot. Our motions are restricted and it’s normal to find that unusual. Professor Bailenson claims that ‘‘There’s a growing research now that says when people are moving, they’re performing better cognitively.’’

Is there a quick fix? The professor’s advice is that we consider whether the room we video call in is the best one for this particular activity. Pay attention to where your camera is placed and whether devices such as an external keyboard can serve as a tool to establish distance or freedom of movement. For instance, an external camera that isn’t close to your monitor would enable you to walk around and doodle in-call, just like you would in an office. Additionally, switching your video off every once in a while during a call is a good way to make conversations with groups easier. Reward yourself with a short break, in which you don’t participate or talk.

4. The amount of information we’re expected to take in is much more in video conversations.

Bailenson remarks that in live conversations, nonverbal communication comes easy and everyone can naturally make and read body language signals subconsciously. During video calls, however, you have to put in so much more effort to send and pick up these signals.

According to Bailenson, people have turned the live conversation (which is such a natural action to us) into something that forces you to think: ‘‘You’ve got to make sure that your head is framed within the center of the video. If you want to show someone that you are agreeing with them, you have to do an exaggerated nod or put your thumbs up. That adds cognitive load as you’re using mental calories in order to communicate.’’

Another possibility is that gestures could imply various things when you’re in a video call. A quick look at another person during a live conversation could entail a different thing than an individual mid-call who’s checking on their pet off-screen.

What about a quick fix for this issue? When a video call has been going on for a while, reward your brain with an ‘‘audio-only’’ pause. Professor Bailenson finds: ‘‘This is not simply you turning off your camera to take a break from having to be nonverbally active, but also turning your body away from the screen so that for a few minutes you are not smothered with gestures that are perceptually realistic but socially meaningless.’’

Many organizations (read: schools, big companies, and government derivatives) have approached the Stanford communication researchers so they could gain better knowledge about how to establish the best for their specific video call arrangements and successfully create useful institutional protocols. Professor Bailenson, as well as Jeff Hancock (founding director of the Stanford Social Media Lab), Géraldine Fauville (former postdoctoral researcher at the VHIL), Mufan Luo (graduate student at Stanford), and Anna Queiroz (postdoc at VHIL), replied by creating the Zoom Exhaustion & Fatigue Scale (ZEF Scale) to assist in calculating how tired we are from having to do our job through video calls.

The scale, described in a recent (not yet peer-reviewed but published on the preprint website SSRN) paper, introduces a study on how to estimate how tired we are from interpersonal technology, as well as the reasons why we feel tired all the time. The scale involves 15 questions and you don’t have to pay for it, which is great. It’s also already tested by five different studies during the last year, where over 500 individuals took part. The questions revolve around your general feeling of being tired, your physical exhaustion, social fatigue, emotional states of exhaustion, and lack of motivation. Some of the questions are:

Hancock believes feedback from the ZEF scale can aid in modifying technology in a way that the main reasons for our exhaustion are controlled. He points out that we’ve already experienced this: ‘‘When we first had elevators, we didn’t know whether we should stare at each other or not in that space. More recently, ridesharing has brought up questions about whether you talk to the driver or not, or whether to get in the back seat or the passenger seat. We had to evolve ways to make it work for us. We’re in that era now with videoconferencing, and understanding the mechanisms will help us understand the optimal way to do things for different settings, different organizations, and different kinds of meetings.’’

Fauville (now an assistant professor at the University of Gothenburg, Sweden) states that ‘‘Hopefully, our work will contribute to uncovering the roots of this problem and help people adapt their videoconference practices to alleviate ‘Zoom fatigue’. This could also inform videoconference platform designers to challenge and rethink some of the paradigm videoconferences have been built on.’’