Elon Musk, the man who gave many of the coolest inventions to mankind, has achieved another success. The NASA shuttle landing. Not so long ago, there was news that he first sent his Crew Dragon to the ISS, and we already see news of the successful completion of this mission.

The first flight of the Crew Dragon spacecraft to the ISS has completed successfully.

The crew of the first American manned spacecraft Crew Dragon in many years, consisting of NASA astronauts Douglas Hurley and Robert Behnken, returned to Earth, or rather to the water. 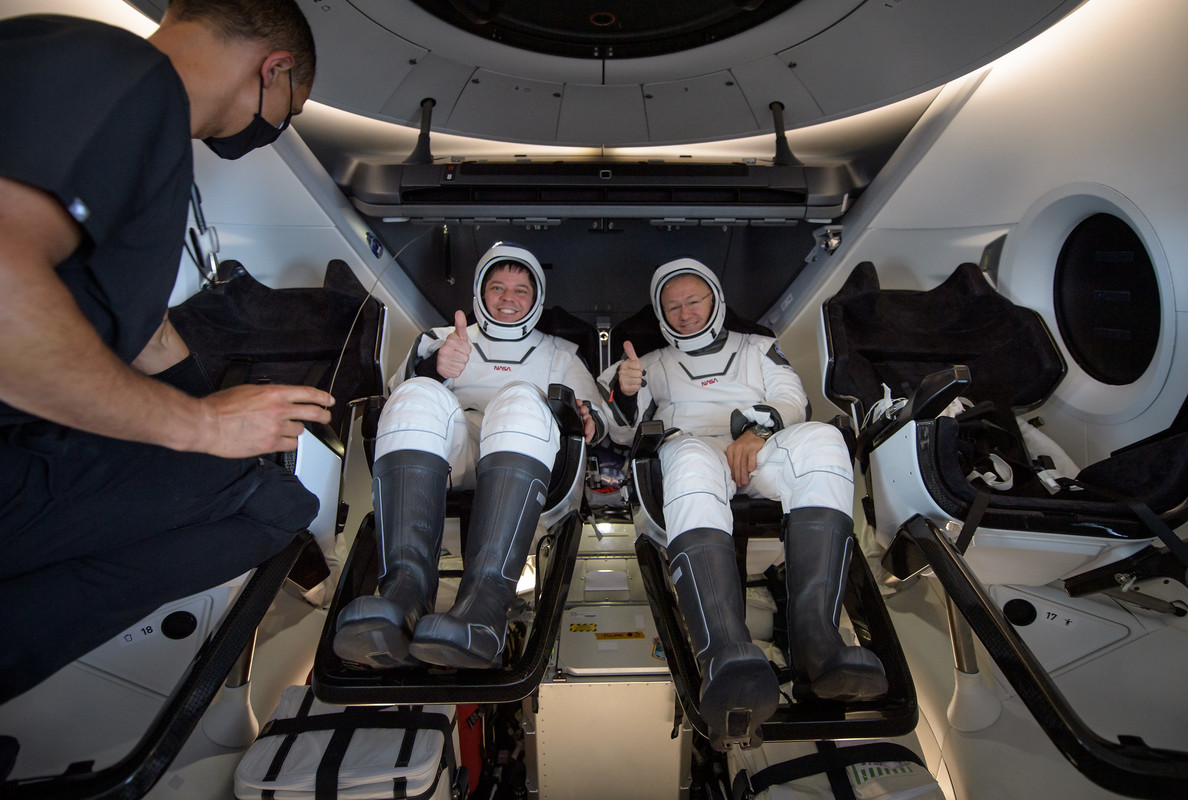 Their ship’s descent capsule splashed down in the Gulf of Mexico off the coast of Pensacola, Florida. Thus ended the 64-day expedition of American astronauts to the ISS, which ushered in a new era in manned astronautics ‒ the era of private spacecraft.

“It was an outstanding day,” said Gwynne Shotwell, SpaceX’s chief operating officer during a post-flight press conference. “We have received tremendous satisfaction after months of anxiety.”

Soon after splashdown, the spacecraft was boarded on SpaceX’s rescue boat, and the astronauts feel fine. Now NASA, as the customer of the mission, together with SpaceX, will have to carefully analyze the data collected during the entire flight, based on which a decision will be made on certification of the spacecraft for flights to the ISS. The next flight may take place at the end of September when three Americans and one Japanese astronaut will be sent to the ISS for six months.

This summer expedition became a landmark for the world, but first of all, for the American astronautics ‒ the nine-year period, during which NASA astronauts did not fly into space on their rockets, came to an end, and the United States was completely dependent on Russian Soyuz rockets for this.

Roscosmos, on the other hand, which readily provided the Americans with seats in their ships, constantly increasing the price of an orbit ticket, will soon lose this source of income.

By the way, during the Monday morning, US President Donald Trump, the head of SpaceX Elon Musk, the head of NASA Jim Bridenstine, the head of the European Space Agency Johann-Dietrich Werner expressed their congratulations.

Now the United States has received its vehicle for delivering people to the ISS, and within a year the second ship, the Starliner from Boeing, with tests of which there were problems earlier, should enter service.

“We are entering a new era of astronautics. The manned commercial program really proved the business model of our movement forward and that we are doing so much, as never before,” said the head of NASA Jim Bridenstine. “Today is the day of the great victory. However, this is only the beginning.”

The Dragon spacecraft undocked from the ISS 19 hours before landing ‒ this time the engineers used for several corrective braking impulses so that the capsule sat in the desired area. Initially, 7 possible landing sites were selected around Florida, but Hurricane Isaias forced them to choose the most peaceful area. 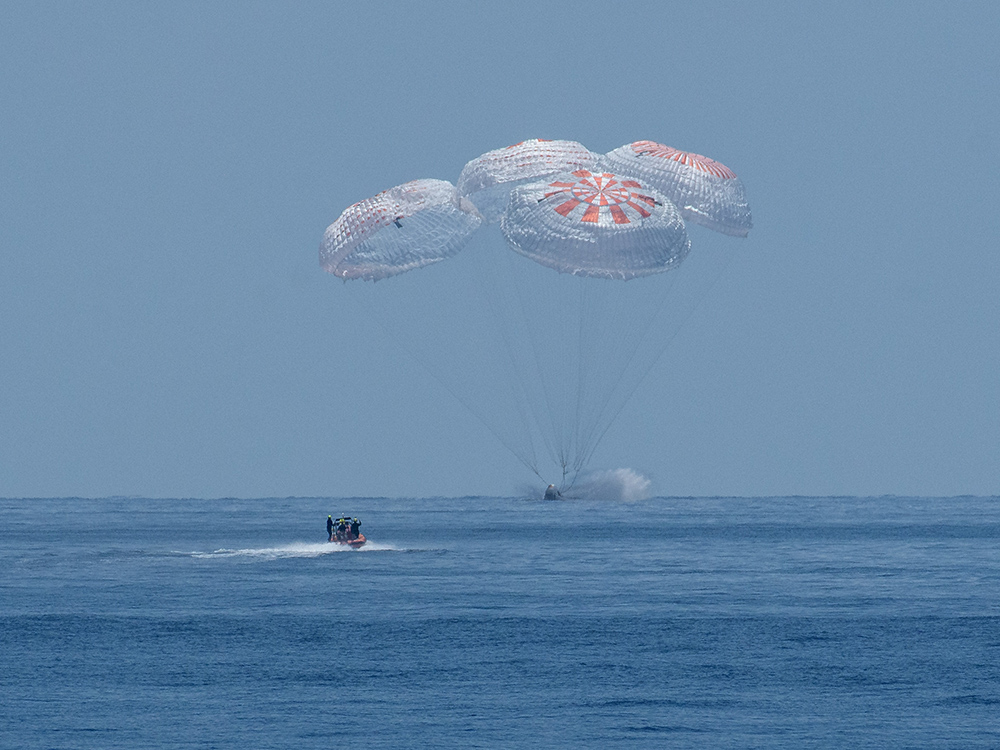 As always happens when returning from orbit, Dragon entered the zone of no communication with the Earth for 6 minutes due to the action of the plasma flowing around the ship, and soon smoothly descended to the surface of the water on four main parachutes.

Shortly after lifting the slightly burnt Endeavor capsule with a hydraulic lift aboard the ship, the hatch was opened and the astronauts breathed fresh air for the first time in two months. “Everyone who touched Endeavor today should remember this day, especially considering everything that happened this year,” said Hurley.

The landing sites are selected by specific priorities, ranging from the choice of the date and time of departure from the station to the maximum number of landing opportunities in geographically different locations for insurance against extreme weather changes. Prioritizing the short time between undocking and landing based on orbital mechanics, with a daytime landing condition is also important. 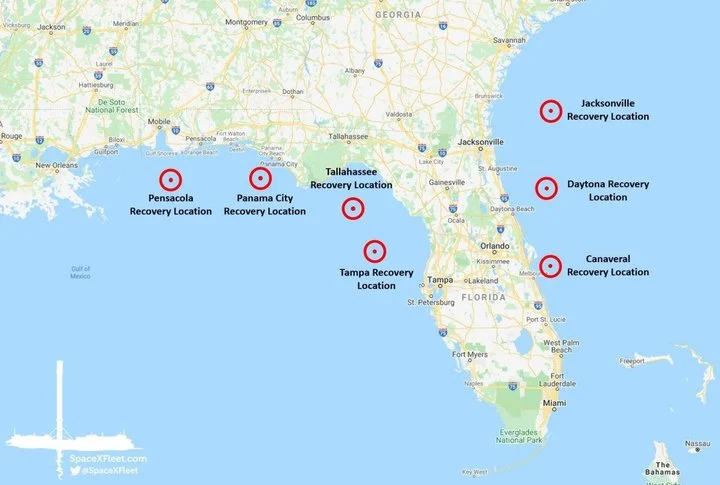 The landing was not only the first return of American astronauts to their territory in 9 years but also the first splashdown of astronauts in 45 years. The last time US astronauts splashed down at the sea was in July 1975 after the successful Soyuz-Apollo mission.

This caused some confusion in the process of lifting the capsule from the water. The fact is that soon after the splashdown the capsule was surrounded by several private motorboats at once, being interfered with the presence of rescue boats, which could not swim to the ship first.

After splashdown, the ships of the rescue teams Go Searcher and Go Navigator set off for the capsules. Engineers, rescuers, medical personnel, and other NASA experts were verifying the integrity of the Crew Dragon and conducted an operation to safely lift the capsule with astronauts onto the deck of the rescue ship. Once medical personnel completes all the necessary preliminary checks, the astronauts will be allowed to leave the spacecraft and enter the medical area for recovery procedures. 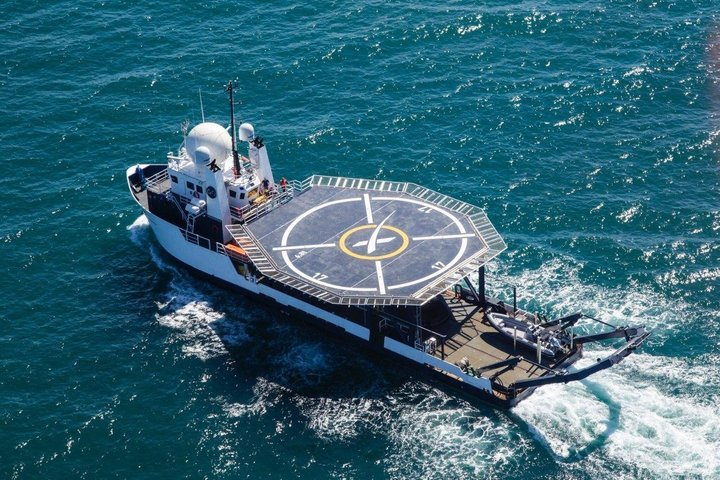 This caused concern of representatives of NASA and SpaceX, because in the future, in the event of unforeseen situations, the presence of unauthorized ships in the splashdown zone may interfere with rescue and pose a threat to the fishermen and the curious people.

“A lot of boatmen ignored the messages of the Coast Guard and decided to enter the zone, putting themselves and the participants in the operation in possible danger,” said Coast Guard spokesman John Michelli.

The broadcast footage showed that one of the boats was carrying the Donald Trump campaign flag. The headquarters of the candidate, however, denied the incident, according to the New York Times.

“We were not ready for this. After they sat down, boats surrounded them. I think the whole America watched the landing of the capsule on the water with trepidation, however, yes, we have something to improve next time, “- commented on the situation and the head of NASA Bridenstine.

The landing and recovery operation went “incredibly smoothly,” said Shotwell, reporting only two technical issues. Firstly, an auxiliary generator broke down on the GO Navigator rescue boat, and secondly, near the splashed capsule, rescuers recorded a high level of dinitrogen tetroxide, a high-boiling oxidizer of rocket fuel used in space. This poisonous substance did not pose a danger to rescuers and astronauts, but in the future, it may pose a threat to strangers approaching the capsule.

After launch, Elon Musk called the mission “the first step towards making humans a multi-planetary species.” According to the head of SpaceX, this ship was created by people for people and humanity can be proud of it.

Crew Dragon was introduced in 2014, after which it was refined and tested for a cargo version for six years. Before Crew Dragon’s flight, SpaceX delivered cargo into orbit using the Dragon spacecraft.