Bella Thorne’s new video is out now on OnlyFans

23-year-old Bella Thorne’s had a pretty great 2020 tbh. The Disney star was involved in a couple of movies this year, came out with several music videos, and grew her net worth thanks to OnlyFans (not without the obligatory backlash from the internet, though). Considering how many celebrities haven’t been able to work as they would normally because of the pandemic, Bella has done a great job in the last 12 months. The last thing the actress did to make our jaws drop was the music video she uploaded to her OnlyFans because her ‘‘body is too much for Insta,’’ as the actress mentioned on Instagram in the caption to the photo she shared of the video shoot. 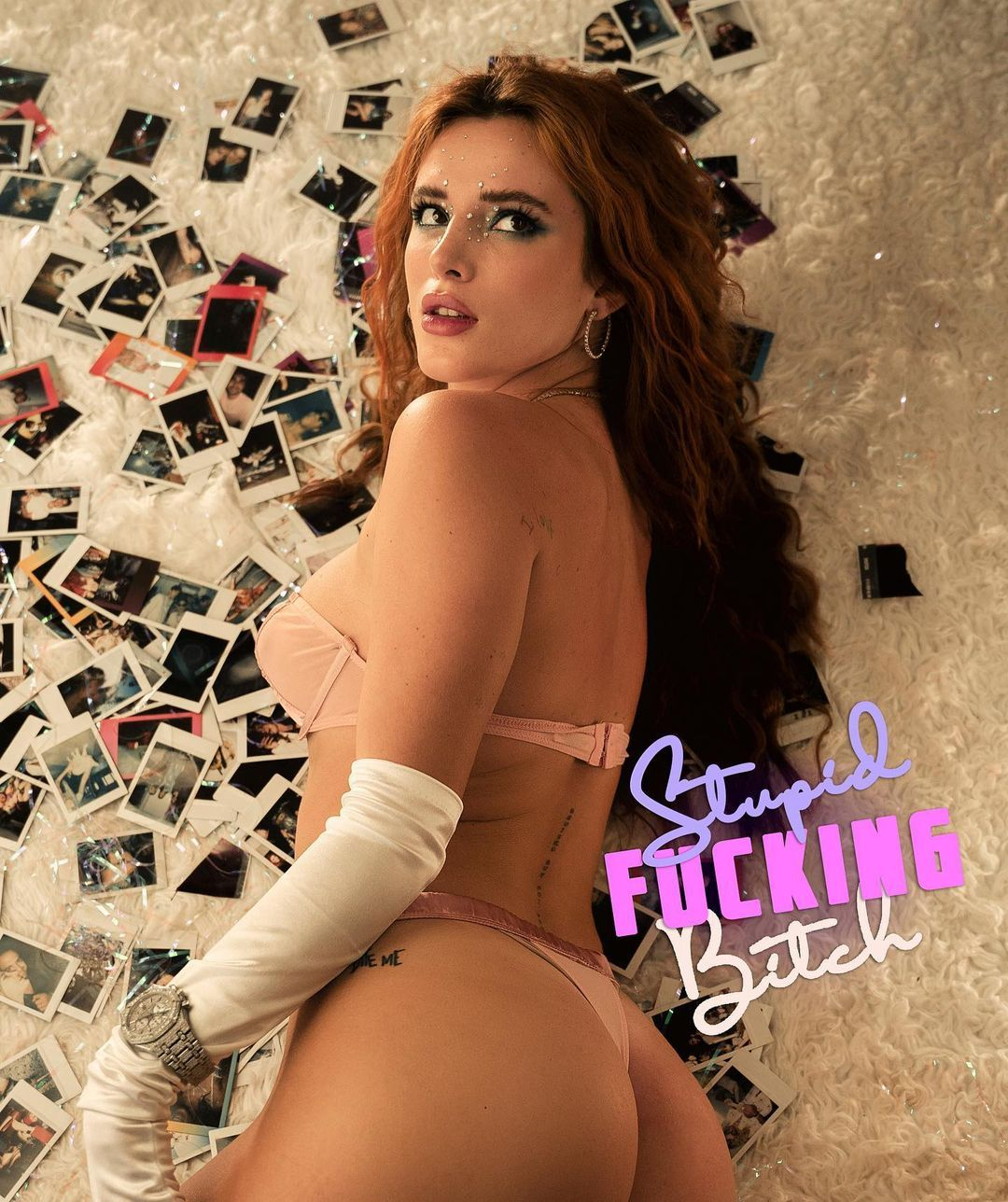 The ‘‘SFB’’ video dropped on OnlyFans just a couple of weeks after the music video for her song ‘‘Lonely’’. The NSFW name of the song is “Stupid Fucking Bitch” and even though it was later released all over other platforms, Bella gave her fanbase on OF an exclusive first look. The singer did the same thing with ‘‘Lonely’’, releasing it first on OnlyFans and then other media.

In the video of her latest song we can see Bella and her friends chilling around a campfire as she sings about the ‘‘bitch’’ she dedicated the bop to. The relaxed evening evolves into a cool looking pool party in classic Bella style.

You can watch the video here -> https://www.youtube.com/watch?v=AvkZ1XKwy3Q.

OnlyFans has become super popular because admirers of different celebrities love to get exclusive information directly from the famous personalities with early access. Bella Thorne is one of the most influential names on OF. On the website, you can also find the account of Cardi B, Tyga, and Black Chyna, who are some of the top earners on the content subscription service. Bella was reported to have made $1 million in the first 24 hours after she registered for the site and Tyga supposedly bagged $8 million after he posted his nudes. Even Vice’s Munchies brand has been added to the OF family, which means the website now features various content. Can you guess who else is on OnlyFans? That’s right! Tana Mongeau herself! Bella and Tana used to date back in 2019 and the ‘SFB’ song is allegedly about no other than Bella’s ex ‒ Tana. The exes are both on TikTok as well and use the platform as a battlefield, creating a shitton of TikTok drama daily. Bella’s mostly blaming Tana for using her to get famous ‒ as mentioned in the song.

That’s probably not the last we see of Bella on OnlyFans. Seeing how the fans react to her on the site means she won’t stop posting content. But OF is by far not the only place to see the actress and the site didn’t remain Bella’s main focus in 2020. She also starred in Netflix’s ‘The Babysitter: Killer Queen’, which was released in September last year and was №1 on the movie/series site for a while. The actress/singer was also involved in ‘Chick Fight’ ‒ a Redbox Entertainment comedy with Malin Akerman and Alec Baldwin (released in November). Bella was also in ‘Infamous’ and the thriller ‘Girl’. That’s four productions in one year (on top of everything else of course). Not bad in our book!

Don’t worry. We’re not finished. The Disney star was grinding hard last year and here’s another venture she embraced. In classic Bella style, the actress didn’t shy away from sharing sexy photos (on IG) from the shoot of her cannabis brand aiming to popularize her new business opportunity. She blessed her fans with lingerie photos back in December and captioned one photo “Ok but really tho no effect”, while naturally looking amazing. Thorne displayed her cleavage and slim waist in a satin bra (and underwear+suspenders) while holding a joint in her mouth. Her red hair was styled in wavy curls, matched with teal eyeshadow, fluttery eyelashes, and a rose lipstick color. 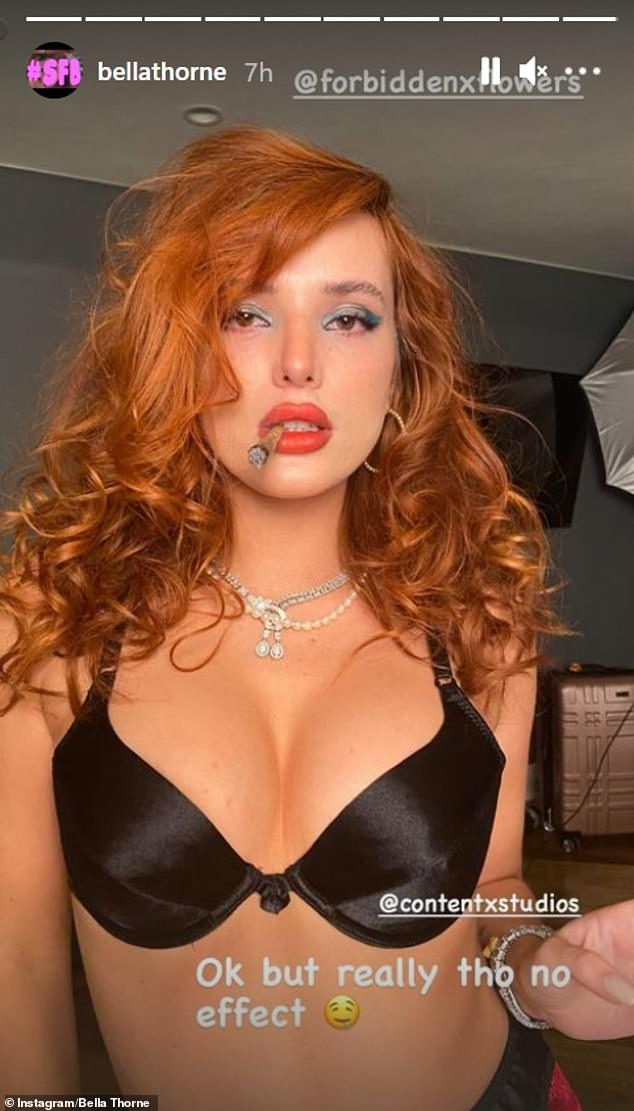 Bella’s cannabis brand is called “Forbidden Flowers” and it launched back in October 2019. The project is a collaboration between Bella and Glass House Group and provides Sativa, Hybrid, Indica, and CBD. “I have struggled with anxiety for many years, and weed was the one source I found for me to do the most healing,” publicly mentioned Bella before. “Because of the properties in weed, I have been able to cope with my anxiety in a natural way, rather than my doctors trying to fix it using prescription drugs.” The brand’s website specifies that “Bella, being an avid consumer of cannabis, did a lot of research and found her best fit in Glass House Farms,” adding that the actress has strains specifically developed for her. “Bella spent a year sampling innumerable strains and refining her hand-picked favorites before landing on the strains we have today.” You can check out the discussion with Forbes about her weed brand here.

The actress is now dating 27-year-old Benjamin Mascolo. The pair has been together since April 2019, after the actress broke up with Tana. Bella was reportedly in a polyamorous relationship with both Mod Sun and Tana. Thorne broke up with Mod Sun back in February 2019 and just two months later she and Tana separated as well.

Bella Thorne is ‘grateful’ that her fame and fortune has blessed her and her family with a lavish Mexican vacation. “I got to fly my whole family and team out to Mexico. This has been a dream of mine my whole life. I’m so so f***in thankful and grateful. The only person missing in my bro Remy who lost his passport. Ps (yes everyone was covid tested like so many times on this trip),” shared the celebrity on IG. The singer shared some stunning photos from her stay in Tulum, where she and her family spent New Year. Amongst the lucky ones invited to the luxurious trip were her mom Tamara, her sisters Dani (27) and Kaili (28), her boyfriend Ben, and her mom’s beau Ross (as well as her team). The group traveled by a private jet, which definitely must have cost Bella. To live like the rich and famous means going boating and go-karting in the jungle, as Bella and her family did. They also had access to their private beach, which the actress shared on her Instagram stories. Many shade Bella for taking this unnecessary vacation, however, Thorne’s purpose of the visit is work-related. She was involved in a virtual New Year’s Eve event with Diplo at a ‘secret location’. The event took place at the Hard Rock Hotel in Riviera Maya, where the body of Ana Gomez (a 21-year-old worker in the resort missing since Dec.18) was found several days before. Bella also gave away $50,000 to fans who advertised the event on IG. There was also a prize for two nights at the same luxury resort. Thorne, however, faced heat because she didn’t specify how many people were attending the party and didn’t promote social-distancing and mask-wearing like one should during a pandemic.

Bella complained before about paying $45,000 for tests this year in total. “With as many music videos and shoots I have directed in the last two months I have spent 45 k in covid tests so far!!”. Her bae was born in Italy and therefore not allowed to fly to the US because of Coronavirus restrictions relating to non-essential travel. That’s why the couple has been meeting up in Mexico ever since July.

Watch out for Bella Thorne because she’s not going anywhere for a while. She has always been in the public eye and also has already booked a few projects for the year 2021. She’s supposed to be in the film ‘Masquerade’ and the TV series ‘Paradise City’. Let’s hope her upcoming projects do great.