If you are a fan of Game Of Thrones, there’s no destination more obvious than Northern Ireland. Most of the show`s dramatic and moody landscapes are shot here.

Northern Ireland is trully breathtaking and the vast landscapes look even more beautiful than on screen.

Just like the Lord of the Rings have inspired many to travel abroad and visit the famous locations, Game of Thrones is probably considered one of the most used  screen tourism sites..

GOT is one of the most popular and successful fantasy TV series ever made. From season 1-7 they have been filming on more than 25 different locations around the country or you can say that roughly 75 percent of  GOT is filmed in the Northern Ireland.  I have visited some of the places and i must say tv-screens does not do them justice.

Easiest way to explore the stuning landscapes is to drive across them yourself. I rented a car at the airport and my journey begun as soon as I marked the famous Giant Causeway Coastal Route on my navigation system.

Driving on this rugged coast line, expoloring historic castles and enjoying breathtaking scenery is the perfect setting for my Game Of Thrones story. And dont forget that all of these locations are within easy reach of Belfast.

This is actually where the character Jamie Lanister is held captive. Also this is my second best location on the Coastal Route. The huge and steep white cliffs have been used in several scenes.

Taking your steps across this unique bridge (which may shake, all acording to the winds and the weather) Views of the stunning coastline are to each side and straight ahead as you step off the bridge and on to Carrick-a-Rede Island – the ‘rock in the road’ where fisherman came to catch migrating salmon.

Also known as the Kings Road , this is my favourite location, especially if you love taking photos as I do, this place is so idyllic  and picturesque. This beautiful avenue of beech trees was planted by the Stuart family in the 18th century and intended to impress visitors as they approached the entrance to Gracehill House.

You can drive or walk along the ”King’s Road” which led Ned Stark to his death and Arya Stark away from King’s Landing. This location is by far one of the most photographed landmarks on the Game of Thrones Map and its hidden road on the way to Bushmills.

The village of Cushendun itself stands on an elevated beach near the Glendun and Glencorp valleys. The caves are sat to be 400 million year old and  they are a thing of natural beauty and undeniable proof of the picturesque qualities of the Northern Irish coastline

The caves are easily accessible by foot along the coast from the village.

This beautiful spot appeared in Game of Thrones season two as a cove in the Stormlands – the memorable scene saw Melisandre give birth to the shadow creature. 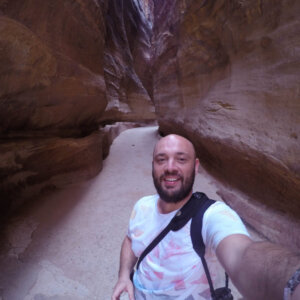 My name is Fedja Salihbasic. I am a Travel & Lifestyle Photographer & Professional Instagramer, born in Bosnia and living in Denmark for the past 23 years. During the past couple of years, I have attracted large follower bases on both Instagram and Facebook. I am happy to share my passion with so many people, that I am now among the 1% most influential Instagrammers in the world out of 400 million users and I feature on the list of the most followed Danish Instagram users.