TWIFT | Lifestyle | From the backyard to performing in front of 15.000 people

From the backyard to performing in front of 15.000 people

Hi, twifters! My name is Jonas Drøger and this is my story.

For a living, I’m a professional football freestyler and entrepreneur.

My adventure started back in 2013 on the terrace of my mother’s backyard, where I was able to do eight juggles with my right foot – today, I’m performing in front of thousands of people and writing autographs for hours on end.

Through football, I have met some of my best friends; it has brightened my future and allowed me to grow as a person by helping me to develop the mindset that I have today. When you have a dream, anything is possible… so “Never Stop Dreaming”. No matter how hard things may seem, it’s essential to always fight for your goals and dreams.

I’ve always been an excellent player, and I remember starting out when I was only 6 years old. At the time, I wasn’t really able to juggle or do any tricks. I recall watching a video on YouTube one day, where a guy was able to do the craziest tricks with a football. That was my first inspiration.

There was really only one way forward at that point: practice, practice, and practice. No matter what I’ve done with my life, I’ve always given it 100%. Even when my friends and family didn’t understand why I would be on the terrace practicing for hours in horrible weather, I pushed on. I was practicing every single day.

It didn’t take long before I started to miss the communal aspect of football, and that’s when I found out I wasn’t the only one out there interested in freestyle. I came in contact with DFFC (red. Danish Football Freestyle Community): an organization consisting solely of freestylers. At the time, we were only 15 members.

I was invited to Sorø Meet 2013, where football freestylers from all over Europe would gather and work on tricks together. Even though I saw myself as the worst of the group, it provided me with a lot of motivation, and I made many new friends. As the months went by, freestyling quickly became a lifestyle; I would never leave home without my football. I was known in my local community as the guy who was always doing football tricks all through primary school, boarding school, and high school.

The feeling of performing my first show will always stick with me. I can’t recall any other time I’ve ever been that nervous. It was finally time for me to get on stage and show what I had spent all those hours practicing in the backyard. Thankfully, it went really well and opened me up to many more crazy experiences.

The biggest one, by far, that still gives me tingles and makes the hair on my arms stand up, is definitely the show I was doing during an International Champions League match. When my name was called over the speakers all across the stadium and I ran onto the field, I took a deep breath and decided to enjoy my 10 minutes in front of the thousands and thousands of people watching.

Other than that, I’ve competed in the Danish Championship for freestyle footballing. Yeah, you read that right! There are so many competitions and tournaments for freestyling, and the rules are always very simple: you have 3 minutes, 2 footballers are competing, and there’s 1 ball.

You take turns showing your tricks and by the end of three minutes, the judges will have found a winner based on the difficulty, style, and creativity of your tricks.

My idol became my best friend

As in any other sport or activity, I had an idol. When I started out, a guy named Brian Mengel, also known as Brizze, had won the Danish Championship in freestyle footballing two times in a row. I was only able to do a few tricks at the time, but I still chose to contact him and a few days later, I was sitting on a train to Funen on my way to visit him. One day quickly turned into three, and even though he was 7 years older than me, we both loved the sport so much that we formed a very unique friendship. No matter what level or age you’re at, there’s room for everyone in freestyling.

Since 2014, Brizze and I moved into an apartment together. We’ve seen many places all over the world together and done countless shows, and we’ve also visited many football schools. Basically, we’ve created a strong bond through freestyle, and we see each other several times a week to practice together. Football really has given me friendships for life. 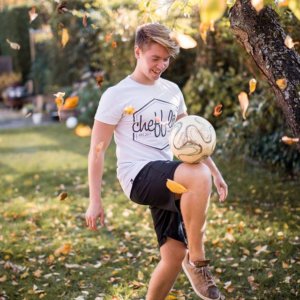 My name is Jonas Droger. For a living, I’m a professional football freestyler, Youtuber and entrepreneur. I am part of the danish YouTube fenomena called 'Gutterne'. I love the fact that i kan work with what I love the most.