Our favourite Carters are in the spotlight again and we love it! This time the family is trending not because of mom and dad, but little Blue Ivy instead. Bey and Jay-Z’s daughter has been retroactively nominated for a Grammy!!! Shocking considering she’s only 8 years old, I know. But this is what life’s like when your mom is a world pop star and your dad calls himself the “god of rap”. 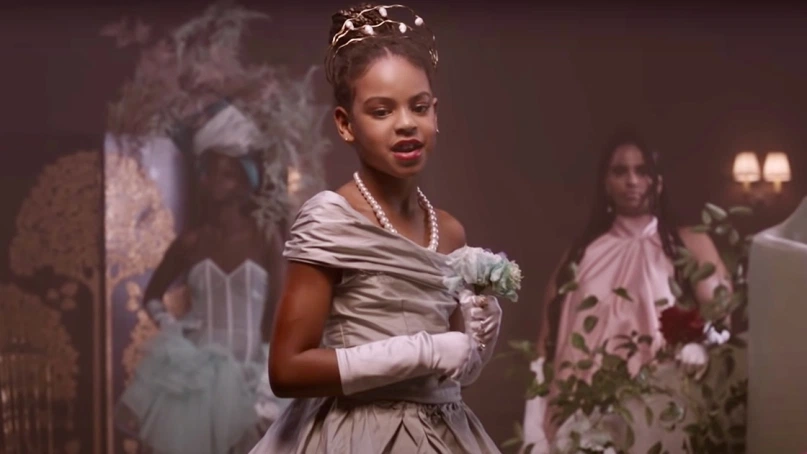 This is an appropriate moment to observe how fast time flies and remember back when Blue Ivy started her career with her debut in one of her dad Jay-Z‘s songs (“Glory”), where she’s featured crying in the background. Blue also has rapped on a bonus track for her dad’s ‘4:44’ album, has featured on Bey’s song ‘Blue’ back in 2014 and has made appearances in her mom’s videos. Like mother, like father, Blue Ivy is going big!

When the list for the 2021 Grammys was first released on November 27th by the Recording Academy, Blue’s name was absent. Her mom, however, received a nomination for Best Music Video for her song ‘Brown Skin Girl’ (the video dropped on August 24th and you can hear Ivy’s vocals and see her glowing). The thing is that Blue is a featured artist in the song and sings in the beginning and end of the 6-minute-long piece. The Grammy for Best Music Video is presented to the main artist as well as the featured one.

The director and producer of the video are also included. (Rules state that “for a featured artist to be recognized as a nominee, 1) the artist must be credited and recognized as a featured artist, and 2) there must be significant performance and artistic contribution by the featured artist beyond what might be considered merely an accompaniment.”) That’s why on Friday, December 11th Ivy Carter was added to the list of candidates after the Grammys site was updated to match the alteration. Alongside Blue, Wizkid (who’s also a singer on the same track) was also added as a nominee. Furthermore, SAINt JHN (who’s also in the song but not in the music video) wasn’t even included in the list, even though he sings with little Ivy at the start of the piece.

On the same note, our Queen B slew by including Lupita Nyong’o, Naomi Campbell and Kelly Rowland in the video and the lyrics of the song. “Pose like a trophy when Naomi’s walking; She needs an Oscar for that pretty dark skin; Pretty like Lupita when the cameras close in; Drip broke the levee when my Kellys roll in.”

Since this hit is meant to serve as a triumph for women with dark and brown complexion, Beyoncé choosing our beloved celebrities of colour is admirable. “I love everything about you, from your nappy curls to every single curve,” signs the Texas-born and raised Queen. The lyrics aim to embrace the natural beauty of ‘brown-skinned girls’ and act as an ‘anthem’ for body-positivity. We’d say: ‘Mission accomplished, Bey!’

Ivy is, nevertheless, not backing down. Having such a great mom may look incredible, but it only means that you have to work twice as hard. Even if that means grinding from a young age and being in the spotlight. Blue is a co-writer of the song in question with her mom, her dad, Nigerian singer Wizkid, SAINt JHN and others. ‘Brown Skin Girl’ was a special success for the eldest Carter sibling since it landed the young performer many awards: a Soul Train Music Award, a BET Awards’ HER Award (her first one ‒ back in June for ‘Brown Skin Girl’) and a NAACP Image Award for the outstanding duo, group or collaboration. Additionally to that, Ivy was the narrator of the audio for a children’s book (‘Hair Love’), where a Black father goes through the process of learning to style the hair of his daughter. (The animated short film also won an Academy Award back in February.)

Her nomination for a Grammy puts Blue in one category with some of the youngest nominees in the history of the Awards, as reported by Billboard. The youngest nominated artist currently is Leah Peasall of the Peasall Sisters. Leah was only 8 when she won ‘Album of the Year’ (back in 2001) alongside her sisters. She was a credited artist on the ‘O Brother, Where Art Thou?’ soundtrack. (Leah, her sister Hannah (11 years old) and her other sister Sarah (14 years old) were singing ‘the Wharvey Girls’ ‒ daughters of a character played by George Clooney. They performed the memorable songs ‘In the Highways’ and ‘Angel Band.’) Deleon Richards is the youngest one who received an individual nomination, being only eight-and-a-half when she was nominated for Best Soul/Gospel Performance (for her album ‘Deleon’) in 1985. The eldest daughter of Jay-Z and Beyoncé turns 9 years old on the 7th of January, which is 24 days earlier than the awards, so she’ll already be nine (and 24 days) by the time of the 2021 Grammy Awards and that’s why she can’t be the youngest nominee. If ‘Brown Skin Girl’ wins (and chances aren’t slim), however, she can be the second youngest Grammy winner.

Even if Blue is lucky enough to win though, she’s still going to have a looot of catching up to do. Her parents are the slayers of the Grammys. Her mom has 24 Grammys by now (and will probably add a couple more to the list in 2021) and her dad has 22! Jay-Z was the most nominated person in Grammy history this year (same as Quincy Jones) with 80 nominations. Bey didn’t back down and she tied Paul McCartney with 79 nominations. That’s some motivation!

Beyoncé’s also been working super hard this year. She surprised us with that AdidasxIvyPark Drip 2 collection serving some great looks and providing female empowerment through clothes. Is there anything she can’t do? The collection featured neon, black and brown colours, and various body sizes, as well as some pretty sick shoes, so I’d say it was indeed a great success. Last year, the ‘Upgrade U’ singer dropped an album (The Lion King: The Gift) that included songs inspired by the movie ‘The Lion King’, where our Queen was the voice of the character Nala. ‘Brown Skin Girl’ is naturally also on this album. Another accomplishment for Bey this year is her visual for ‘The Gift’ called ‘Black is King’, which included the ‘Brown Skin Girl’ video. The singer scored a total of nine Grammy nominations in 2019 and is a Best Music Film nominee for ‘Black is King’.

In case you live under a rock and you still haven’t seen the video, you can watch it here:

‘Brown Skin Girl’ (directed by Beyoncé and Jenn Nkiru) will compete against Future and Drake’s “Life Is Good,” Harry Styles’ “Adore You,” Anderson .Paak’s “Lockdown” and Woodkid’s “Goliath” for the win this year.

The Grammy Awards (that have been happening for the last 63 years) for the year 2021 are scheduled to air on Friday, January 31, although we can never know because of the whole Coronavirus situation. If 2020 has taught us anything, it’s: don’t assume things will happen according to plan.

Before you go, check out this short gif of Blue trying to tell her parents to calm the fuck down, but in a gracious way of course. She’s adorable, you have to give her that. It’s obvious she’s the true ruler of Carter’s home, not Queen Bey like we all thought.