How did it all start? That is the question I get asked the most. But I never seem to find the time to answer it, except for now – so here you have it!

When I was 16 years old, I moved out to live with my grandparents, as I couldn’t stand living with my parents a second longer. I thought there would be more freedom and space in the countryside in terms of job opportunities, education and life in general. A few months later I started my first education as an electrician, but I quickly learned that it wasn’t for me to sit with calculations and crunch numbers in an electrician schedule, which is necessary to learn in order to work with power and loads. It all ended with me dropping out.

After a few months, my grandparents started to get a bit impatient over the fact that their grandson was living in their guestroom without doing shit, so they kindly asked me to start on a new education.

In the meantime, I met my very first friend who was from the same small village as me. His name was Nikolaj. Luckily for us, he lived in a house right next to a farm that had a workshop, and when I say workshop, I mean a REAL workshop, you know – where they almost had more empty cans than tools. Here we spent an insane amount of time. I remember us pimping my poor grandfather’s old Suzuki Alto into near destruction xD. This was probably where my passion for messing with machines started.

I often laugh of the young people who have just been given a driver’s license and right after, they pimp their rust pile of a car into ghetto spaceships, but then I remember that I wasn’t any better myself.

The picture is dark. But here is the pimped Suzuki Alto. 😊 It had pimped up plastic rims, fog lamps of the worst quality and new oil.

As time went on, I soon realized that I had to find a job where I could make some money instead of drinking liter after liter of soda in the workshop. So, in 2007 I started the same education as Nikolaj – Farm Machinery driver aka. FARMER.

Gradually, Nikolaj and I became closer friends. We were constantly chilling in the workshop after school. We made all sorts of strange things. This could possibly be where I gained my experience with tools and mechanics. I remember we produced many stupid, crazy and dangerous things back then, for example; mopeds with more diode lights than the Storebælt bridge. We even made cannons firing with pressure vessels and water rockets.

This plays an important role for my journey into the world of YouTube. We filmed many of the things we made and afterwards I would usually upload it on YouTube. This was way back in 2007, but despite the search, I can’t find any videos from back then, because I forgot the channel name – haha 😊

As you can see, there was no limit to what two dudes in a workshop could do with a T-Hansen shopping list. Regarding the car, we build in neon tubes, a giant sound system, extra lights, and homemade rails – For 3,5 years we had a blast in that workshop. Sodas slowly started to be swapped out with beers and I often found myself on my way home from the workshop in a prober inebriate, of course without the car. I usually picked up the car the day after on my way to school, because it often happened that got drunk on a weekday. What a youth!

During my education, I got myself a job at a huge estate, where I worked with their heavy machinery. I got fired right after I got my degree, mainly because they had to pay me more, but alså because I had destroyed machines for over 400.000DKK. I was never ment to be a farmer!  This resulted that I went on unemployment benefit, so my motivation to find a job, was nowhere to be found. So here I was – home alone with my grandparents and SO bored. My boredom made me discover YouTube and the possibility to mage more personalized content. At the time there were a total of only eight YouTubers. I can quickly name a few of them: Brianfromdenmark, Alexgameplay, Benny, potterXD, badeandenB and Calleman812. YouTube in Denmark was no bigger than that – it is crazy to think about that today.

Even though most people think that I started my YouTube career with Minecraft gaming videos, it started much prior. Namely with videos from the workshop.

You can almost say that I grew up with machinery and workshop coziness, and it is basically what inspired me to start messing with machinery myself. When it came to motorcycles, I realized that they are just so easy for me to do. I ended up spending the winter with a couple of my friends in their workshop fixing their motorbikes with everything from breaks to motor, which really motivated me to do more!

The following spring, I was missing some content to my channel, so I decided to raise some money through a livestream for a motorcycle series. I managed to raise 30.000 kroner for the project. The first thing I did after that was of course to find a dealer with a cheap motorcycle and I found one from ‘Enghave Motor’. On top of this, he was ready to help me with issues that might occur during my project. BUT! Which project?

Yes, I did raise money for a motorcycle series of 10 episodes, where I had to build my own ‘café racer’, meaning that you take a standard “boring” bike and turn it into a “fast paced”-motorcycle. However, here it must be said that I had no idea of how one really builds a motorcycle. But I just said – “fuck it!” and started anyway.

The first thing I did was to search the market for spare parts and search for common and known issues to keep an eye on. Afterward, I, of course, had to make a shopping list for spare parts and tools. Next, I went on YouTube, where I saw all the videos that existed on the motorcycle I had just bought.

Finally, the day was here! The motorcycle arrived and I began my project. It was a huge success. The motorcycle ended up perfect, cool and everything I wanted it to be. The same happened to the episodes, and it seemed like my viewers loved them.

This all sums up in an important life lesson! – remember that it is important to do the things that make you happy, dare to do the thing you have a passion for, otherwise, nothing is ever going to happen to your life. I am so insanely happy that things have gone so well, and I ended up going from school dropout to motorbike-fixing YouTube Star. 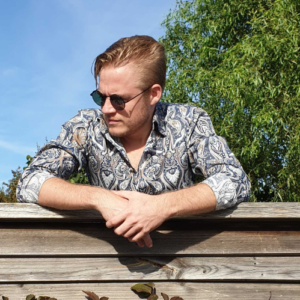 My name is Philip Madsen and I am one of the first YouTuberes on Danish YouTube. I am known for being well dressed with an edgy humor. My chanel is centered around teck, gaming and DIY-videos from my workshop.