After saying goodbye to Griff Karga and Kara Dune, Dean Jarin (known in the inhabited part of the galaxy as Mando) sets out in search of the relatives of the little eared trick. The baby’s origins are shrouded in mystery, and Mando decides to seek advice from his tribesmen. However, the Mandalorians are scattered throughout the galaxy, and finding them is no easier than the mysterious green Cheburashkas. The first stop is Tatooine. According to rumors, it is there, in the town of Mos Pelgo, lost in the middle of the desert, that one owner of Mandalorian armor is hiding. 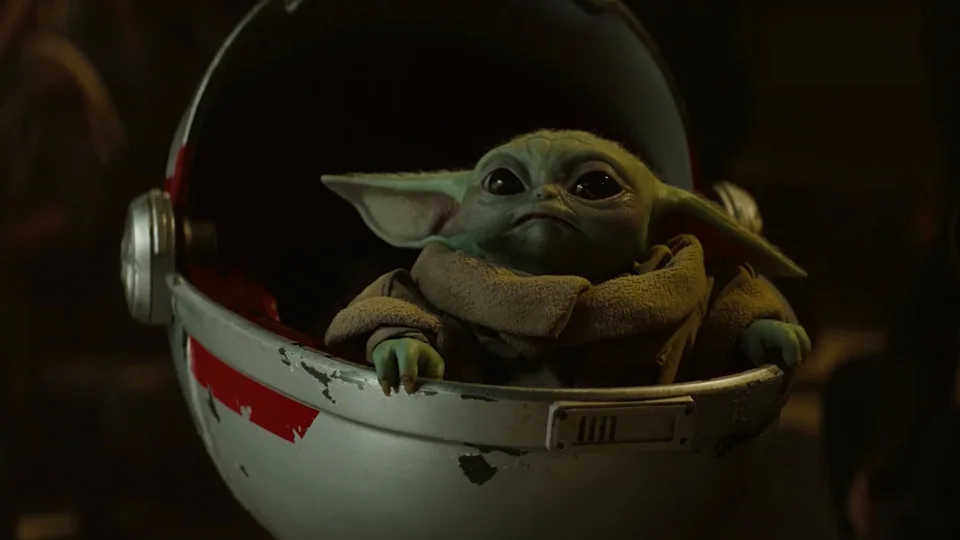 “The Mandalorian” is one of the few Disney Star Wars projects that has appealed to both old and new fans. But even this one could not escape criticism. The “Mandalorian” was scolded for being too short in timing, too local stories, weakly developed characters, for lacking a connection with the big galaxy. Judging by the first episode of the second season, the lion’s share of these claims will remain in the past.

The first season of “The Mandalorian” served as a kind of testing ground ‒ the creators tested the capabilities of the latest technology. In the second season, they got bolder and decided to tell a bigger story. The scope of events increased, and along with this, connections with the grand universe appeared. If the first season was a local story of one warrior and his friends, then in the second, Mando begins to explore a distant, distant galaxy, and on the way, he comes across faces familiar to fans.

The Mandalorian Season 2 Episode 1: The Western on Tatooine and the Return of an Old Friend

As conceived by the creators, each new series of “The Mandalorian” is presented in its genre, and the “Marshal” turned out to be a real Western. The atmosphere of a western is felt in every detail. This also applies to the place of action ‒ a town lost in the desert, where the local marshal remains the only representative of the law. There are music and epic duels with gazes that take place a second before the start of the shootout, and a stereotypical cast of characters in which Tusken robbers replace aborigines, brutal and incomprehensible raiders. However, even these “Indians” are not alien to nobility, heroism, and loyalty to the given word.

Thanks to this stylization, Tatooine, familiar to us (sand, sand everywhere), begins to play with fresh, bright colors, and the Tusken culture, in principle, is revealed ‒ for the first time outside the expanded universe.

The main star of the first season was a Baby Yoda ‒ appearing in the frame, it effortlessly switched the viewer’s attention from the main character to itself. In The Marshal, both the Child and Mando fade into the background, because the ninth chapter is a real benefit performance of that very local Marshal, brilliantly played by Timothy Oliphant. Oliphant, who made a name for himself on brutal westerns (“Deadwood”) and stylized westerns (“Justice”), looks like a native in the frame and gets sincere pleasure from participating in the filming. His duet with Mando deserves more than one episode.

If in the first season Jon Favreau was only a showrunner and screenwriter, then in the second he could not resist and personally sat in the director’s chair. This is not his first experience in television ‒ Favreau directed episodes of Sheldon’s Childhood, Orville, My Boy, The Office, and The Revolution, so all the details of the format are familiar to him. At the same time, he brought the atmosphere of a big movie to The Mandalorian. The episode looks like a real blockbuster, albeit not in terms of timing, but spirit for sure. The scale has increased in everything ‒ and in close-ups (what gorgeous landscapes of Tatooine!), and the action, and in the size of the crowd, and the dimensions of the beast opposing Mando and the rest.

The narrative unfolds at a frantic pace, every few minutes the viewers are waited by either a spectacular action scene, or an unexpected plot twist, or an Easter egg that is cute to the fan’s heart. The fan service does not seem intrusive, and the action has improved in quality compared to the first season and for once unfolds in the light of day. The final scenes of the hunt for one of the representatives of the Tatooine fauna would be the envy of an average blockbuster.

The main shortcomings of “Marshal” lie in its fillerism and secondary nature. Although Mando seemed to go in search of his fellow tribesmen, the trip to Tatooine did not get him a step closer to his goal. The whereabouts of the other Mandalorians, like those of the Kid’s kin, remain a mystery. Improved special effects, improved lighting, and increased scale do not hide the fact that all this was already in the first season. Mando had already hunted rare representatives of the fauna (only on another sandy planet and with the help of other Tatooine aborigines) and made unexpected alliances (with Kara Dune on Sorgan). Even on Tatooine, he has already visited it.

The second season of “The Mandalorian” is back a year later even better than before. The episodes have become longer, the stories are larger, and other famous inhabitants of a distant, distant galaxy flicker in the frame.

What is the series about?

Mandalorian Dean Jarin (with the voice of Pedro Pascal) travels a galaxy far, far in search of other Mandalorians. With their help, he hopes to find the relatives of the Kid and transfer him to them. So he falls into a trap set by the Abyssinian Gore Koresh (voiced by John Leguizamo): the bandits surround Mando and the Kid, but they easily fight off the criminals and set a course for the legendary Tatooine. A mysterious Mandalorian must be present on the sandy planet where Luke Skywalker once grew up. 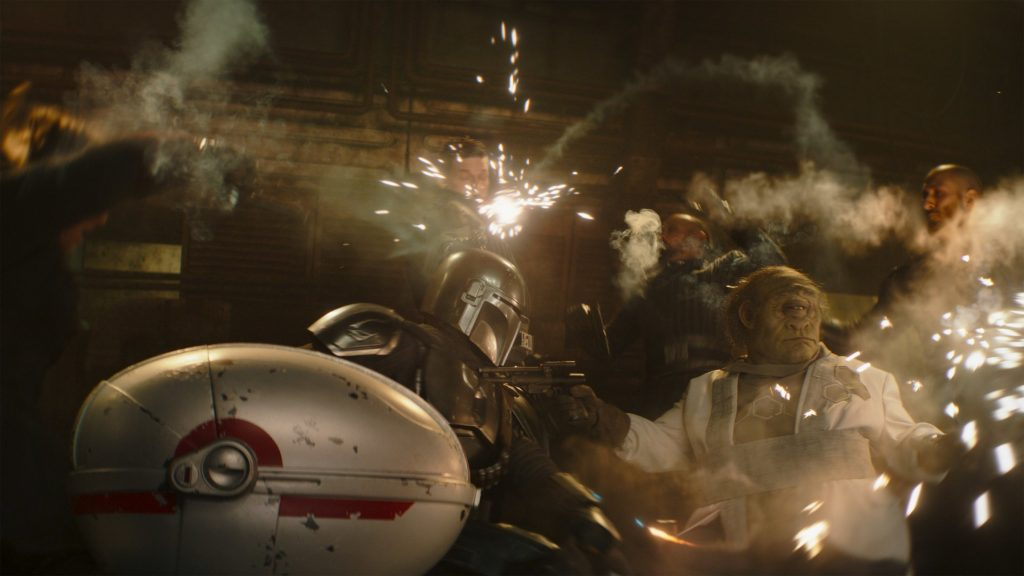 On Tatooine, he meets an old acquaintance ‒ the mechanic Peli Motto (Amy Sedaris). She points to the town of Mos Pelgo, absent on the maps, where the hero collides with a helmet to helmet with a man in green Mandalorian armor familiar to all Star Wars fans. However, they are not hiding under the legendary bounty hunter Boba Fett, but Marshal ‒ a local sheriff named Cobb Vance (Timothy Olyphant is once again playing a representative of the government). He bargained for the armor from local Javas and is not going to give it away just like that. The planned firefight is interrupted by an earthquake: the city is once again attacked by a huge monster ‒ a Krayt-dragon, moving under the sand.

Marshal proposes a deal: he will voluntarily give Fett’s armor if Mando helps to deal with the pest. He decides to use the Tusken raiders ‒ the nomads’ conflict with the inhabitants of Mos-Pelgo, but are ready to bury the ax of war in the sand and join forces in the fight against the monster. The series ends with a large-scale battle scene: the Marshal, humans, and Tusken try to blow up the belly of the Krayt-dragon, but nothing comes of it. There rescues the situation Mando, who flew with explosives directly into the mouth of the monster. He gets armor and goes home, and in the last seconds, we see that a mysterious stranger was watching him all this time, in whom the actor Temuera Morrison is easily recognizable. In the prequel trilogy, he played Jango Fett, who created a clone son, Boba, so their appearance should be identical. So the legendary bounty hunter who died in the sixth episode of Star Wars is back. In the next episodes of “The Mandalorian” we are waiting for the lies about how he escaped from the belly of the Sarlacc. 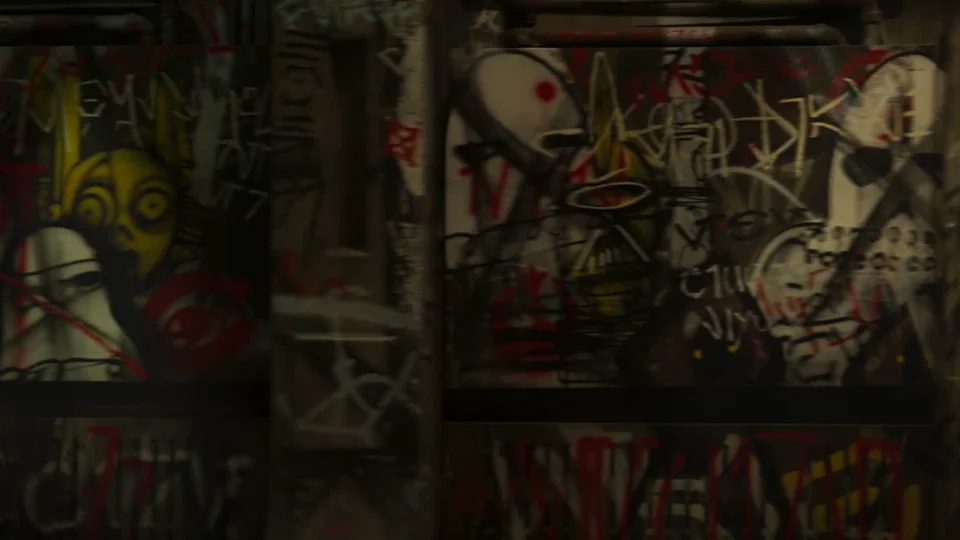 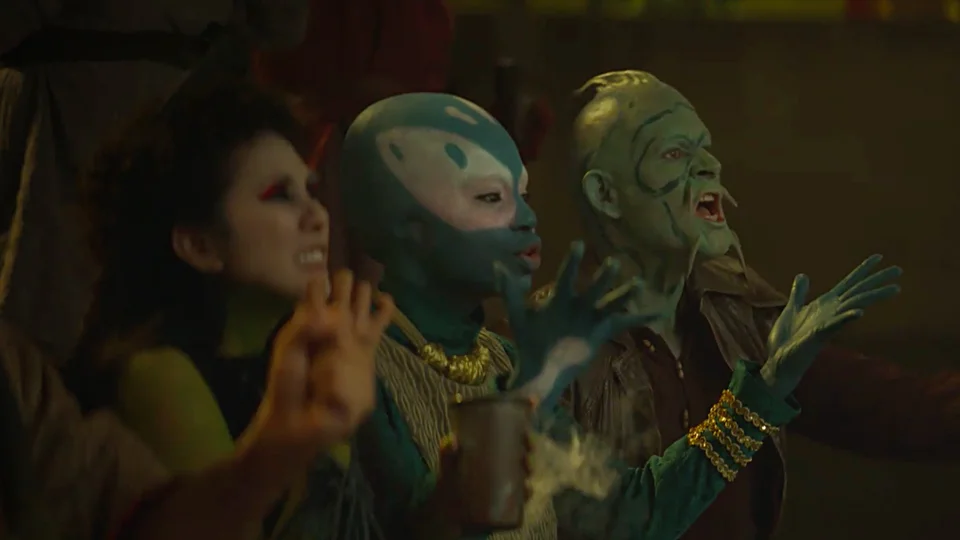 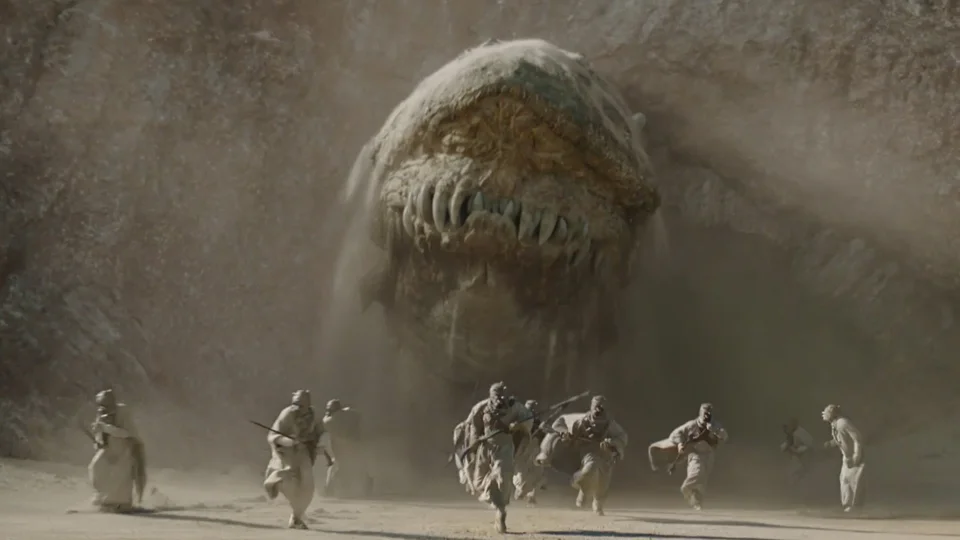 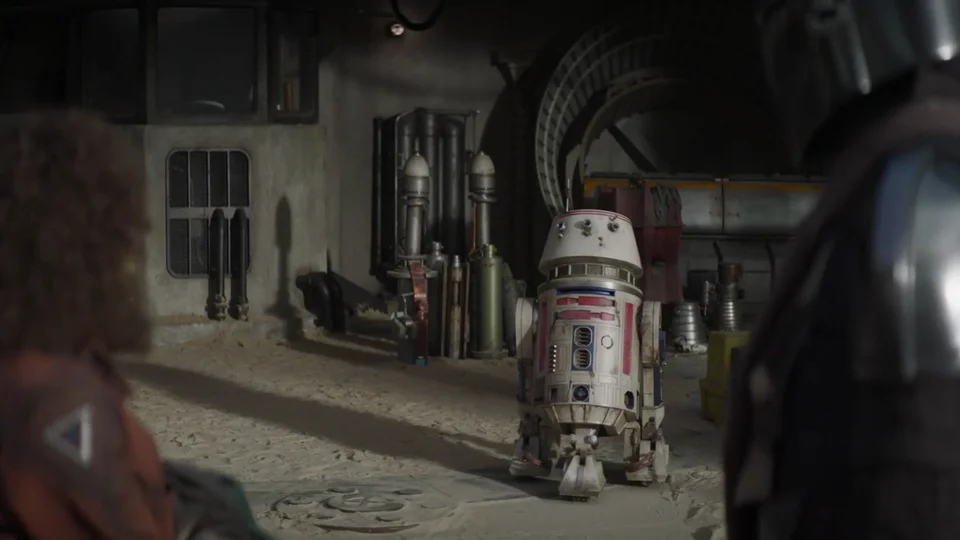 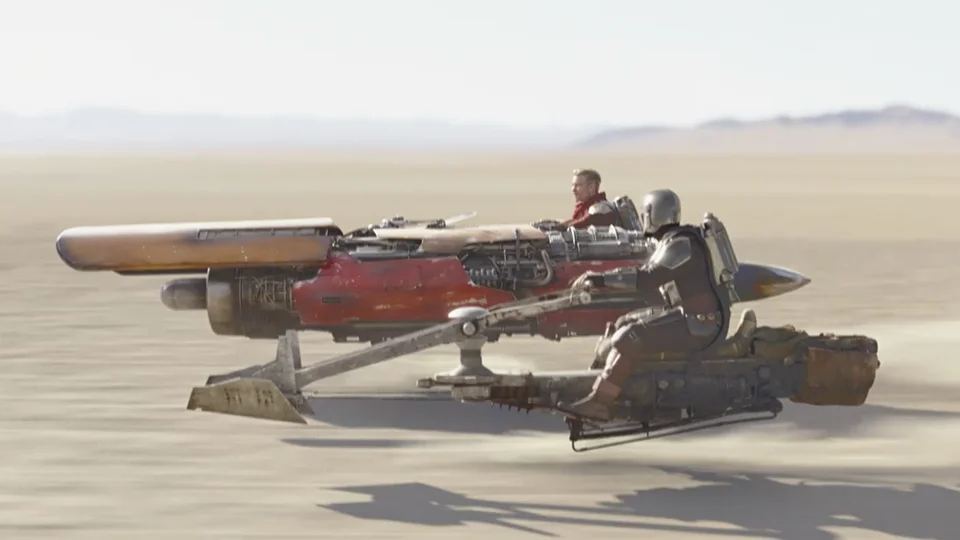 The new season began with an unusually long streak (50 minutes versus the usual 30); showrunner Jon Favreau himself was in charge of directing and script, who preferred to give the fans exactly what they were waiting for. In “Marshal” we see a dozen familiar alien species, Tatooine (without which, apparently, “Star Wars” cannot exist at all), a sweet Kid, and the usual Western stylization ‒ Mando enters Mos Pelgo as if on horseback, looking around the houses on both sides of the street, and the failed shootout with Cobb boasts a tense duel of gazes and holster angles.

“Marshal” does not develop the main story arc, but tells about a side quest ‒ the hero again protects ordinary people from danger (something similar was in the fourth episode of the first season), as if completing a task in a video game, and as a reward, he receives the armor of the legendary Boba Fett. But there is no complaint about it: an epic fight with a Krayt-dragon would do credit to any Star Wars movie, and in the finale, we get confirmation that Boba himself is alive and watching Mando. 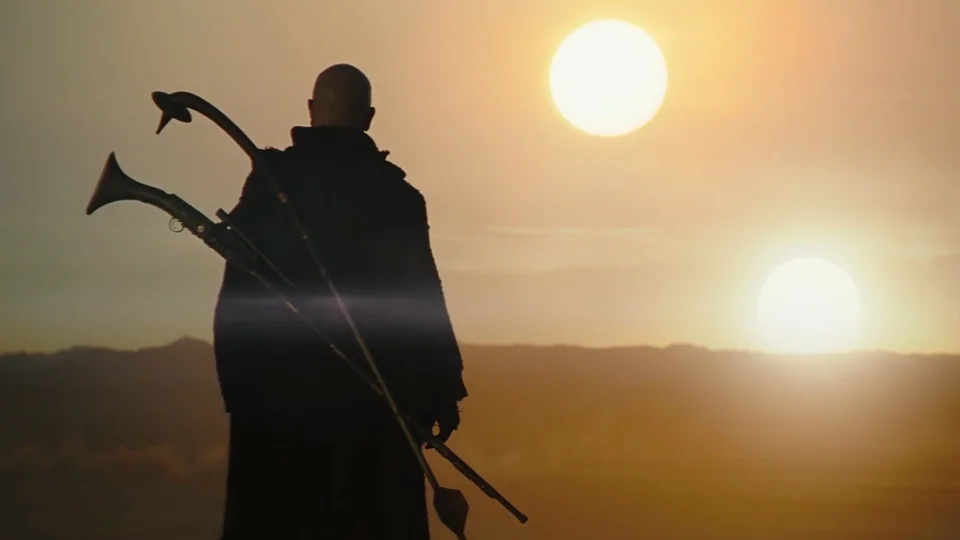