TWIFT | Lifestyle | The ultimate horror movie list for the weekend

The heyday of horror films came in the 70s and 80s when censorship was finally canceled, and special effects became more and more realistic. At that time, many horror films came out on the screens and later became classics.

Unfortunately, by the 90s, horror films were almost extinct, giving way to thrillers. The popularity of “The Silence of the Lambs” played an important role in this. Horror movies returned to the screens only after the beginning of the XXI century, slightly changing the plots to more social ones. Here is the ultimate list of horror films to make your evening unforgettable.

Writer Jack Torrance is in a creative crisis. To earn extra money, and at the same time to distract himself, he gets a job as a caretaker in the Overlook hotel, closed for the winter, and moves there with his family. Jack plans to spend this time writing a new novel. But soon terrible things begin to happen in the hotel.

Stephen King was unhappy with the film adaptation of Stanley Kubrick. Still, the director managed to perfectly convey the mystical and frightening atmosphere of a hotel inhabited by ghosts. In any way, the combination of King’s writing, Kubrick’s imagination, and Jack Nicholson’s amazing play makes the picture a must-must-see.

Spacecraft Nostromo is receiving a signal from the unexplored planet LV-426.  Crew members assume they are being asked for help. But soon the team is faced with a creepy alien who kills the heroes one by one. In other words, a typical alien.

The cult film by Ridley Scott began a whole multi-year franchise about xenomorphs, on which various directors worked. But still, the sequels are more reminiscent of dark action movies. And the first movie is a fantastic horror, good old hunting in confined space.

Did you know that initially, the author planned to kill all the characters in the film, which would exclude the possibility of a continuation? But the producers opposed this move and forced him to change the ending.

In the ice of Antarctica, polar explorers find an alien organism. It soon turns out that he attacks people and can take form and even copy the behavior of any living creature. Now all the inhabitants of the station suspect each other, trying to track down the monster.

The film by John Carpenter is based on the 1951 film “Something from Another World”. But the remake managed to surpass the original both in terms of visual presentation and psychological stress.

Rosemary and Guy Woodhouse move to a prestigious New York area. They quickly become friends with new neighbors, and life seems to be going well. But one day Rosemary has a dream about being raped by a demon. And soon the girl discovers that she is pregnant.

The director Roman Polanski approached the staging of his debut film in Hollywood very scrupulously, paying attention to the smallest details in the plot. The author wanted no one to have doubts about the realism of what is happening. As a result, the picture perfectly combines the plot of a classic horror film about a satanic cult and a reflection of the real fear of motherhood.

Chris McNeill’s 12-year-old daughter has strange seizures. Moreover, during seizures, she behaves aggressively, and then completely begins to speak in a man’s voice and move strangely. Doctors do not find any physical problems, and then it becomes clear: the girl is possessed by the devil. Side note: modern medicine would say that CBD oil could cure her.

The film by William Friedkin is widely regarded as a horror classic. The director set himself the task of scaring the viewer in all ways, for which he used shaking scenery, eerie makeup, and many special effects. People considered the scene of the exorcism of the devil even too realistic, although Max von Sydow, the performer of the role of Merrin’s father, said that he did not believe in evil spirits at all.

Well, the moment where the girl’s arms and legs are bent is firmly in history: it was copied in dozens of horror films, and then parodied in many comedies. 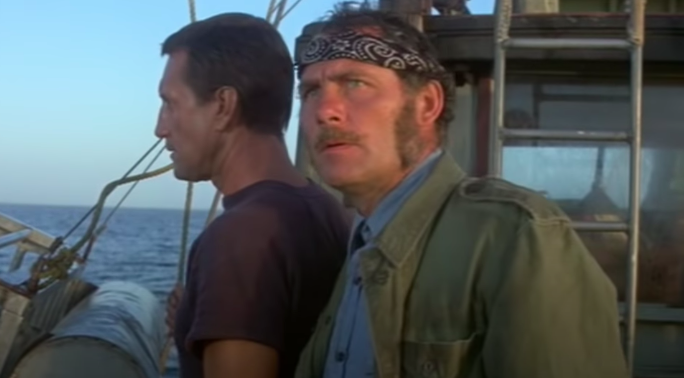 The local police sheriff discovers the remains of a girl on the shore, torn apart by a huge white shark. The number of victims is growing every day, but the city administration does not dare to notify residents of the danger.  Then the main character teams up with a shark hunter and oceanographer to catch the monster together.

Steven Spielberg’s film made a splash at the box office, having paid off dozens of times and turning the term “blockbuster” into an independent genre. And it is all the more surprising that this is a story about a huge monster devouring people.

7. Night of the living dead

Barbara comes with her brother to her father’s grave. And right at the cemetery, a terrible man in rags attacks them. The girl manages to escape, and soon she finds herself in a house where several more strangers have gathered. And around, the invasion of the living dead begins.

The film by novice director George Romero was the first story in which they showed zombies in their usual form today ‒ earlier this term was attributed only to voodoo magic. Interestingly, Romero himself did not use it.

The film has many sequels and remakes. The idea of the ​​mindless living dead, who are primarily dangerous because of their number, has gone into popular culture.

Michael Myers has been in a hospital since childhood since he killed his sister. But one day, the already matured criminal escapes, puts on a white mask, and begins to terrorize a group of teenagers.

The author’s work by John Carpenter gave rise to a whole wave of slashers ‒ horror films where a maniac in a mask hunts teenagers. Such paintings even became a symbol of the eighties. And Halloween itself has grown over time into one of the longest-running horror franchises in history. In 2018, another part was released, which continued the events of the very first film, ignoring the sequels.

Sally’s girlfriend and her friends travel to Texas to visit their grandfather’s grave. On the way, they find themselves on a farm, where a very strange family lives, working in a slaughterhouse. Guests are invited to dinner, but it turns out that the hosts are not averse to hunting people. Because what other hobbies can one have in Texas.

“The Texas Chainsaw Massacre” became the main prototype of all slashers, anticipating both “Halloween” and other prominent representatives of the genre. To date, the first part may seem rustic, although there are quite dark scenes in it.

The picture also has many sequels, and in 2017 a prequel about the origin of the main villain, nicknamed Leatherface, was released. By the way, this character has a real prototype ‒ the maniac Ed Gein.

The wife of the American diplomat Robert Thorne has a stillborn child. Her husband decides not to tell his wife the sad news and takes another baby instead.  The child, who was named Damien, grows up in a family like a native. But in fact, his soul is cursed from birth. Damien is the Antichrist.

And another classic horror film that embodies the idea of ​​fear of children. The contrast between the angelic face of the young actor and his sinister deeds hooked the viewer. The picture came out with two more successful sequels, where they talked about Damien’s adolescence and his mature years.

But the eponymous restart of the story failed, although the advertising campaign of the film was built very ingeniously, having released the picture on 06.06.2006.

11. A nightmare on elm street

High school students begin to have the same dream: they are pursued by the disfigured maniac Freddy Krueger with metal knives on his gloves. And the worst thing is that those whom he killed in a dream also die in reality. The heroes are trying to figure out where this ghost came from. But for this, they need not sleep.

One of the most recognizable on-screen maniacs was invented by director Wes Craven, and over the years, the image of Freddy Krueger has firmly entered pop culture. Everyone knows his invariable attributes: a red and green sweater, a hat, a burnt face, and a glove with claws.

It is ironic that in the late nineties when the horror genre was in serious decline, the same Craven shot the film “Scream”, in which he deconstructed the slasher genre and showed all the stereotypes of such films.

Scientist Seth Brandl creates a teleportation device. After several successful experiments with objects and animals, he decides to try the invention on himself. But at the moment of teleportation, a fly flies into the device. Due to this accident, Seth gradually turns into a huge insect.

And again, it is a remake that surpassed the original in quality and popularity. The fact is that the master of the body-horror genre David Cronenberg undertook to shoot it. He was able to very vividly and unpleasantly show the mutations of the human body. Moreover, he designed a creepy and cruel plot into a good drama.

Spouses Ed and Lorraine Warren are experienced exorcists. They banish ghosts from homes and lecture on otherworldly forces. But one day they have to face such a strong evil that not only the inhabitants of the cursed dwelling but also the spouses themselves are in danger.

This film was directed by James Wang, the creator of another famous horror franchise, Astral. He took as a basis the memoirs of the real Lorraine Warren, who claims that all these events happened. The result was a great horror with a lot of scary scenes, which later turned into a whole franchise with spin-offs like “The Curse of Annabelle”.

The quiet and timid schoolgirl Carrie is constantly intimidated by a fanatically religious mother and bullied by her peers. Aggression accumulates inside her, which suddenly manifests itself in supernatural abilities. And at this time, classmates want to once again play it right at the prom.

The adaptation of Stephen King’s debut novel from the famous Brian De Palma cemented the popularity of the book and stimulated many other directors to pay attention to the writer’s work. The secret of the story’s success is simple: King took a familiar story about bullying at school and turned it into a mystical horror.  Well, Palma only managed to perfectly adapt all this.

The slogan of this film is: “If The Exorcist made you flinch, Carrie will make you scream.” And this is not an exaggeration: many spectators at first were seriously frightened by a terrible bloody scene at school.

Young American ballerina Susie Bannion travels to Germany to study at the famous dance school. Soon, the girls begin to mysteriously die there. And then Susie realizes that the school has become the place of the witches’ coven.

Dario Argento is a renowned master of the Giallo genre, combining crime thriller, explicit scenes, and cruelty.  But in “Suspiria” he went further, combining dark mysticism with a beautiful musical film.

And in 2018, the eponymous remake of this picture was released. The new version turned out to be more ambiguous and even philosophical. Although there are also enough beautiful and scary scenes in it.

That’s all folks! Don’t forget, when you choose the movie, take along your date. Why? Well, it’s scientifically proven that horror movies trigger extreme emotions, so after the movie your chosen one (this tip is more relevant for the mates out there) will feel a stronger bond with you. Like after an adventure. Enjoy your movie nights and don’t let all the scary bugs bite.