Bernie Sanders is glad his meme serves a good cause

2021 is off to a weird start. Even though we’re only a month into the new year, the internet’s meme community has already worked its magic and come up with a few gems. One of them is Bernie Sanders. Do you recognize Bernie’s mittens? They raised $1.8 million for charity in the first week when the meme started circulating.

The meme was born from this photo taken by Agence France-Presse of Bernie Sanders (U.S. Senator) at the inauguration of President Joe Biden. 79-year-old Bernie’s being a whole mood with his mittens and his face frown while wearing the pandemic appropriate famous blue mask. He was destined to quickly become a meme with this facial expression and the clothing. He managed to make us laugh by looking not-so-polished and this is probably exactly what we needed in such tough times. Bernie didn’t dress to impress like the rest of his colleagues and we’re here for it.

The meme made a lot of people worldwide relate. Bernie and his mittens were mocked online by being morphed into Michelangelo’s Hand of God in the Sistine Chapel, the scene from “Ghost” with Demi Moore where she shapes clay, and even the World War Two Yalta Conference (1945) where Sanders is in the company of British Prime Minister Winston Churchill, U.S. President Franklin Roosevelt, and Soviet leader Joseph Stalin.

Bernie’s campaign announced that proceeds from sales of the meme T-shirts and sweatshirts will go to community organizations in the senator’s home state, including “Feeding Chittenden” and “Meals on Wheels”. “Jane and I were amazed by all the creativity shown by so many people over the last week, and we’re glad we can use my internet fame to help Vermonters in need. But even this amount of money is no substitute for action by Congress, and I will be doing everything I can in Washington to make sure working people in Vermont and across the country get the relief they need in the middle of the worst crisis we’ve faced since the Great Depression.” Sanders has mentioned. He released the first batch of the “Chairman Sanders” merchandise (T-shirts, sweatshirts, and stickers) on his website soon after the meme became popular and it sold out in less than half an hour. Afterward more merchandise was provided and it sold out too.

The now-famous mittens were gifted two years ago to Bernie from Jen Ellis, who’s a Vermont elementary school teacher and additionally has a side business making mittens out of recycled wool. The teacher made them using an old sweater that she repurposed. Ms. Ellis also shared on Twitter that she had made three pairs of mittens. She donated a pair each for auction to “Passion 4 Paws Vermont” and “Outright Vermont”, while the third pair would be auctioned on eBay for her daughter’s college fund. She also recently announced a partnership with a Vermont-based company to make 18,000 pairs and profits will go to the “Make-A-Wish” foundation. Jen was bombarded with people asking her to sell mittens like Bernie’s, however, she refused. People, nevertheless, want what they want and soon a copy of the knitted gloves (made by Traverse Bay Crochet) appeared on Etsy. Needless to say, it instantly became popular. Crafter Perales King also got inspired by the meme and created a crocheted 3D version of Bernie. Perales auctioned it off and raised more than $20,000 for “Meals on Wheels”. Pretty fascinating, right?

Sanders’ mittens weren’t the only fascinating choice of his outfit. He also wore a puffy winter jacket by Burton Snowboards prioritizing warmth over style. Bernie, his mittens, jacket, and mask took him on an internet photoshop journey with the Senator appearing on the subway, the moon, and the famous couch from “Friends” alongside the cast of the show. “The juxtaposition of Bernie’s tech jacket and the mittens got people’s attention because there’s a practicality behind what he is wearing,” says New York-based menswear designer Emily Adams Bode. Even though the way Michelle Obama, Lady Gaga, and Jennifer Lopez were dressed that day was stunning, it was a pair of simple gloves that will leave a mark.

The hilarious photo was taken by the photographer Brendan Smialowski. As reported by Sanders’ campaign, Getty Images (which licensed Mr. Smialowski’s photo for the merchandise) will also donate its profits to “Meals on Wheels”.

CNN asked the Senator about his experience surrounding the meme and he responded that he was glad his handcrafted mittens, blue facemask, and trademark glower could be used for something positive.

“Not only are we having fun but what we are doing here in Vermont is we’re going to be selling around the country sweatshirts and T-shirts, and all of the money that’s going to be raised – which I expect will be a couple of million dollars – will be going to programs like “Meals on Wheels” that feed low-income senior citizens,” claimed Sanders. “So, it turns out actually to be a good thing, and not only a fun thing,” he added.

At the end of the day, Bernie looked unique and it paid off. Instead of going for a designer choice, he dressed simply and now he can give back to the less fortunate because he kept warm with the help of his mittens.

A wise person on Twitter even said: “I’m convinced Sen. Sanders would have dressed exactly the same to his own inauguration had he won.”

Since the memes are so many, below are a few of the ones that stood out just like Bernie did. Additionally, you can find Bernie’s merch here. 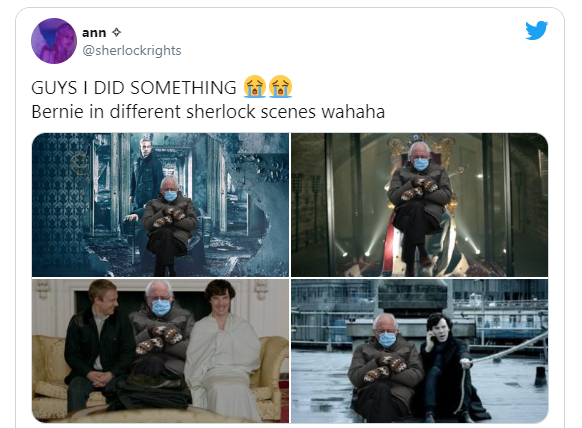