TWIFT | Lifestyle | Everything you need to know about the “Friends” reunion

Everything you need to know about the “Friends” reunion

Wow, guys! The moment we’ve waited for so long is finally here. It feels like we’ve been waiting forever for the entire cast of “Friends” to come together and bless the fans with a comeback. This was something so anticipated and we were all so hyped. Especially since we didn’t see much from the first released trailer of the reunion ‒ pretty much just the backs of the original six actors.

The comeback was scheduled for May 27 and thankfully everything went perfectly. On that exact date, many of us couldn’t wait to check out what HBO Max had planned for us and hoped to see what our favorite actors are up to nowadays. The director of the reunion was Ben Winston and he executive produced together with Kevin Bright, Marta Kauffman, and David Crane (the “Friends” executive producers).

So, what happened at the reunion? Well, firstly, probably not a lot of us expected the podcast/interview vibe of the whole thing. The fans’ constant request for a movie or a short “Friends” episode is so overwhelming that at the reunion the actors were asked about the possibility of that happening. Spoiler alert: It’s unlikely there’s going to be a “Friends” movie after all (unless the producers decide otherwise, according to Lisa Kudrow and what she said during the reunion). 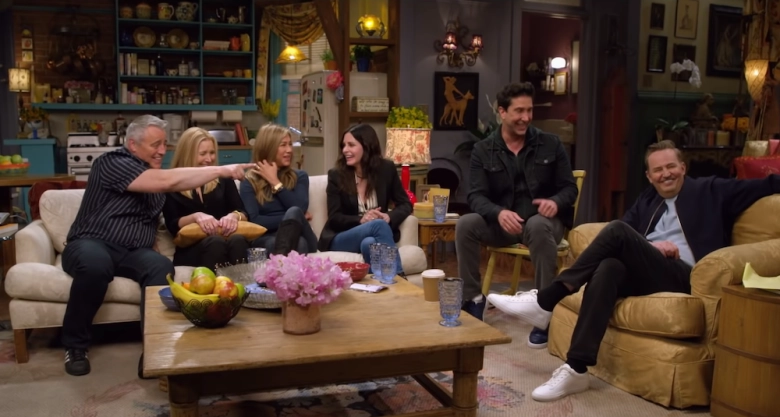 There was so much going on during the reunion. Naturally, David Schwimmer, Jennifer Aniston, Matt LeBlanc, Matthew Perry, Courtney Cox, and Lisa Kudrow all got together and sat down for a not-so-quick chat. So many celebrities were involved and there was so much emotion present. But let’s try to sum up some of the main moments.

Firstly, the fans got to see what the backstage of the show looked like (it was replicated for the event). It was refreshing and confusing to see where the actors used to work and have fun. It’s almost weird that we’re so used to seeing everything on the show polished, we now find it odd to get a peek of everything that we didn’t get to see before. Throughout the reunion, we were shown snippets of the TV show as throwbacks and we can’t deny it felt kind of sad. By this point, all of us probably know the TV show’s episodes by heart but getting to see the actors and how they look now, combined with the throwbacks, felt very nostalgic.

You could also see that the cast was nostalgic too, which made it all the better. The six actors were all crying and they seemed happy to be together again. A lot of people online, however, refuse to be fooled by the seemingly good relationship between the cast members. There have been rumors circling the internet, which reported that the actors weren’t as good as friends when the show was running and they’re certainly not that great friend group we’d probably like to think they are now. We don’t see them together at all and during the reunion, they did confirm that this is the first time they’ve been in the same room since forever.

Two of the original six did mention they used to be pretty close, however. Jennifer Aniston and David Schwimmer shook the internet space by dropping a huge bomb. They shared that they used to have a huge crush on each other back when they were still filming our beloved episodes. But there’s more. These two also dared to claim that it was just a crush and nothing more. They decided not to mix work with pleasure and channeled all their emotions towards their characters. Or so they claim. Who believes that though? There have been rumors about the cast signing a contract to never have sex with another cast member but not many believe this is true. Or if it is, we’re pretty sure they broke that contract. There is this one interview of Andy Cohen with some of the cast members, where Andy asks the actors about the contract and Schwimmer laughingly says ‘‘Well, that was broken.’’ Additionally, during the reunion, Jennifer and David read some Ross-and-Rachel lines and some fans seem to think there’s a spark between the two actors after all. I guess we’ll never know for sure, but it’s pretty likely that they hooked up and still transferred all the chemistry onto their characters. It would make sense why we love them so much.

Some on the internet, on the other hand, find that Ross and Rachel’s relationship is pretty toxic and generally not a good example because of their whole “on and off” situation. While that might be true, at least the reunion did settle one thing ‒ the question that sparks wars: “Were Ross and Rachel on a break?” The opinions are pretty mixed on that one, so if you haven’t already ‒ go and watch the full thing to see what each cast member’s answer is. During the interview, James Corden also asked a lot of questions about different “Friends” episodes. It was like little trivia for the actors and the viewers. How many of these questions did you get right? A true die-heart “Friends” fan will manage to answer all of them correctly.

James Corden interviewed the “Friends” actors and we’re particularly glad he asked each of them about what they think their character would be up to now. They all gave great answers and we can’t deny it made us feel like we missed out on a possibly bigger reunion. Another great idea about the whole thing was that there was a segment dedicated to summarizing how each of the six actors was cast. Some of the stories we already knew but hearing the producers’ point-of-view and how much work went into gathering the perfect cast made it much better.

“Friends” fans are also especially lucky because we got to be taken behind the set and like that wasn’t enough, we also heard some of the stories about what happened more than 20 years ago at that very set.

It’s safe to say that some of the best parts were the producers’ perspective and the throwbacks. Another main focus of the reunion was the many different celebrities.

We got to hear from Reese Witherspoon, who played Rachel’s sister on the show. We also saw Larry Hankin (Mr. Heckles), Christina Pickles and Elliott Gould (Ross and Monica’s mom and dad), Thomas Lennon (Joey’s hand twin), Tom Selleck (Richard Burke ‒ Monica’s ex-boyfriend), James Michael Tyler (Gunther) and Maggie Wheeler (Janice ‒ Chandler’s ex-girlfriend) at the reunion. Many other celebrities were there too. Lady Gaga played guitar and sang “Smelly Cat” with Lisa Kudrow (and it was confusing to a lot of people). Cindy Crawford and Cara Delevingne walked the runway in some of the OG “Friends” suits ‒ the best were Ross’s leather pants outfit and his Sputnik one. Justin Bieber, David Beckham, and Kit Harrington were also part of the event. Mindy Kaling, Malala Yousafzai, and BTS also showed their love for the TV show and the reunion.

“Friends” first aired back in 1994 and we enjoyed 10 great seasons from the TV show thanks to NBC. Many of us grew up with it and Gen Z can now enjoy this amazing TV show on Netflix as well. The series has always been huge and probably the most famous one worldwide but bringing it to Netflix back in 2015 with the full 236 episodes provided that extra boost. Back in 2019, however, the sitcom said goodbye to Netflix and moved to Warner Media’s HBO Max last year.

And now, here we are ‒ the original cast came back to the show’s original soundstage (Stage 24) on the Warner Bros. Studio lot in Burbank to bless us, fans, with a little get-together/ throwback. What do you think about it?