Ryan Reynolds is a fan favorite. Pretty much everybody loves him and there’s a reason why. His jokes make many of us laugh and somehow we still can’t get enough of them. His wife (Blake Lively) also shares that feature and the couple often entertains their social media followers with the way they cutely go at each other.

Ryan is mostly known for his role in “Deadpool” and the reason why the movie is so successful hides precisely in the actor’s take on the jokes. “Deadpool” is proof that the audience does enjoy Marvel-related jokes that connect the whole universe and its characters. This is exactly what Blake’s husband delivers ‒ a shameless but hilarious take on reality. Right now the movie star is filming with another Marvel actor ‒ Mark Ruffalo. It’s therefore only natural that the colleagues use each other as joke inspirations. This time, Ryan came up with a rather hilarious “Thor: Ragnarok”-related joke.

The two actors are currently involved in “The Adam Project”, which is a sci-fi production still in the making. (Once Mark and Ryan are done with shooting, the movie is supposed to be available on trusted Netflix.) The “Green Lantern” star used Instagram on the last day of January 2021 to show his followers some behind-the-scenes photos from the upcoming movie (“The Adam Project”). In the pictures, we can see Mr. Reynolds and Mr. Ruffalo chilling next to a pretty badly broken car. Take a look at the post here and see if you get the  joke: 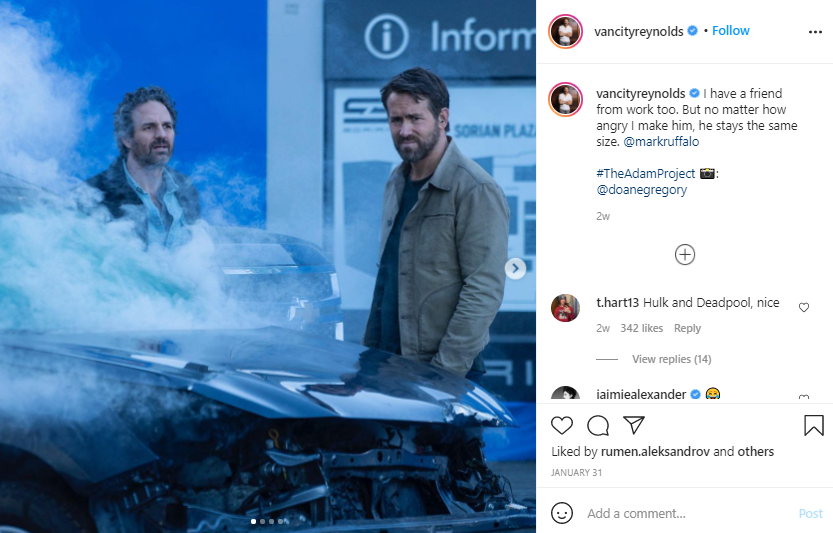 It doesn’t come as a shock that Mark has plenty of work friends. People who follow the “Marvel Cinematic Universe” will easily spot Thor’s memorable line from “Thor: Ragnarok”. In the scene, Thor sees Hulk for the first time on the planet Sakaar, and then he mentions his “friend from work”, who isn’t too happy to see him. (The line came from a “Make-A-Wish” kid that was on set the day of filming).

It’s really difficult to stay indifferent when it comes to Ryan and his sometimes racy jokes and what’s great about them is that they’re always original af. The person he’s portraying in “The Adam Project” is fortunate because he does not need to be anxious about Mark Ruffalo’s Bruce Banner Hulking out on him in a rage because of the trashed car.

We share vibes with Ryan Reynolds because he doesn’t hold back when it comes to Marvel or Disney puns. After the news about Disney and Fox coming together broke, the celebrity expressed his excitement in his unique way with the help of social media. Another instance when he shined was after the announcement that the R-rated “Deadpool 3” was taken on by Marvel Studios.

Now let’s get to the real stuff. Ryan’s humor might be great and all but what makes him different is that he, for some weird reason, seems like a genuinely nice guy. He’s also proved that he’s willing to share positivity whenever he can. One of the best moments was when the actor sent a sweet motivating message to a young fan of “Deadpool”, who’s trying to overcome cancer. We stan a funny but sweet celebrity!

We can expect Marvel-related jokes from the actor, specifically because more of “Deadpool 3” filming progress was made public. Let’s hope we get more behind-the-scenes pics from “The Adam Project” soon! After all, this is supposed to be a good year for Ryan in terms of movies, which always makes the audience thrilled. We look forward to his many jokes and support his career in MSU. He’s one of our favorite heroes there, which makes sense when you take a look at “Deadpool” ratings. Go watch the first movies right now so you can be prepared for what’s coming next. After all, what’s another marathon in a pandemic? We’re all stuck at home anyway.