Elon Musk and his girlfriend got our attention yet again. This time it’s Grimes who shook the internet. She took to trusted Instagram to share with her followers the results from her latest tattoo sesh. She posted a photo of her most recent back tattoo, which is supposed to represent ‘‘beautiful alien scars’’ (as the performer described it). 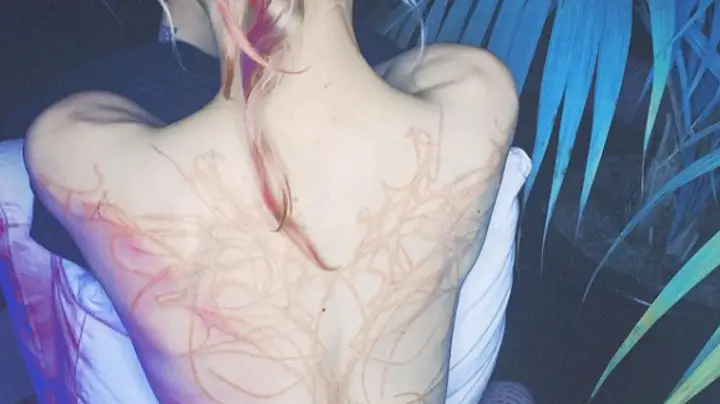 Grimes is Claire Elise Boucher’s stage name. The artist shared the images of her back (and yes, we mean the entire back) tattoo and added as a caption: “Full back in white ink by @tweakt w sum help from the alien computer brain of @nusi_quero.”

She continued: “Don’t have a good pic cuz it hurts too much and I need to sleep haha, and it’ll be red for a few wks, but gna be beautiful alien scars.”

“Hope everyone’s having a good day 😴.”

Some of Claire’s fans and followers were quick to show their approval of the new tat. One of them thought it was “Siiick”, another found it “Gorgeous. Amazing. Out of this world,” and someone shared their opinion saying that it is an “Absolutely gorgeous work.” Grimes does indeed have plenty of supporters.

The performer gave birth to Elon Musk’s son about a year ago and the parents haven’t stopped being a topic of discussion ever since. Whether it was the weird name they picked for their kid, Grimes changing her name to ‘C’, Elon’s career accomplishments (as well as him becoming the richest person worldwide for a while), or little X’s first portable synthesizer loops, these three have surely kept us entertained. Grimes has mentioned before that she’d be willing to move to Mars after she turns 50 to assist in establishing a human colony on the planet. Lucky for her, if anyone can help her with this wish it’s her current beau.

Additionally, in an online Q&A session, the singer confirmed that existence on the Red Planet could indeed get harsh, commenting that this could also mean “manual labor until death most likely” and later including that ‘‘hopefully that can change’’. Fingers crossed, right?

Back in February of last year in an interview with The Face, C was asked which she’d prefer: “rather go to Mars or upload your consciousness to the cloud.”

Her response was: “Like, these are the main things I’m trying to do. I guess I’d like to upload my consciousness, and then when it’s technologically possible, have my consciousness live in some kind of humanoid vessel that can speak and move freely, and then that body can go to Mars and other planets with my mind inside it.”

Elon Musk has been pretty open about his intentions to send one million people to Mars by the year 2050, revealing that he would be launching three starship rockets every day while setting up “a lot of jobs”.

He also claimed that he’s certain humans will land on Mars in the next six years.

“The Earth-Mars synchronization occurs roughly every 26 months, so we had one this year, in the summer. That means in roughly two years there’ll be another one, and then two years after that.”

“So I think six years from now, highly confident, if we get lucky, maybe four years. And then we want to try to send an uncrewed vehicle there in two years.”

The same, however, goes for his bae Grimes and her tiny one. The singer recently sold $6 million worth of NFTs. NASA contracts, NFTs, weird names, and alien tattoos are probably just the beginning of what these three have in store for us.

Would you get an alien scar tattoo on your back or do you think that’s crossing the line and it’s a bit much?