The episode revolves around Cartman and the rest of the South Park kids and whether they manage to stay COVID-free. 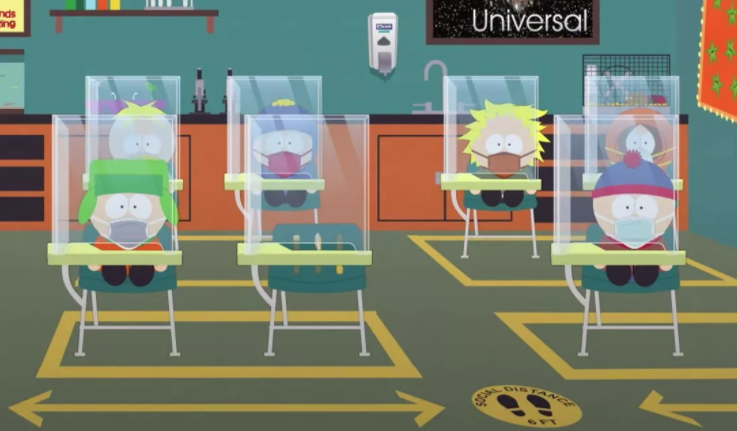 The episode starts off showing a picture of a cold, wintery setting and everyone’s wearing a mask while sad music is playing in the background. Right off the bat, a discussion about small businesses vs essential businesses is initiated. Another topic of conversation is the way masks should be worn over the nose, but instead, people wear them as ‘chin diapers’ (which is not useful at all). Issues like protests are mentioned too, of course, regarding the last couple of months’ events. The different opinions about Coronavirus are also highlighted: the people who take the virus seriously and follow the rules and those who don’t.

A very accurate representation of people’s conversations in the real world is included in the 47-minute-long episode as well. The characters in the TV series start asking each other whether they know people who’ve gotten sick and tested positive. We’d be lying if we said each of us hasn’t been asked that question at least once.

Randy (Stan’s dad) organizes a benefit for COVID. He comments on how his weed business has seen a 40% increase in sales since the pandemic. Randy’s new strain of weed (cleverly named ‘The pandemic special’) is loved by absolutely everyone.

The kids in the episode, who usually go to school, are now glad because they can stay home and just attend Zoom classes (and there are a million ways around actually attending them, unlike regular school). There is also the issue of ‘mask shaming’ between the parents of the kids during their Zoom meeting with a teacher from South Park School. In the meeting, it’s also revealed that the new elementary school teachers are actual police officers (the solution to the lack of staff in the school).

While watching the news about how the virus started from a bat in China, Randy suddenly remembers that he had sex with a bat in Wuhan while partying with Mickey Mouse (which started the whole pandemic) and instantly feels overwhelmed with guilt. However, it’s later reported that Coronavirus didn’t come from a bat, but from a pangolin. The minute Randy hears about it on the news, he gets another flashback from China: again while partying with Mickey, Randy had sex with a pangolin too.

The dad travels back to China to steal the pangolin from the lab and cover his tracks. However, almost immediately after this, he hears an announcement that the scientists, who are working on a vaccine, actually need the DNA from the creature that mated with the pangolin, not from the pangolin itself. Randy, then, comes up with an idea ‒ he jizzes on his weed (that everyone smokes), thinking that he could vaccine the entire city in this way.

When the children go back to school with policemen as their teachers, someone is bound to get shot on the very first day. One of the police officers shoots one of the kids but to the public the police claim that there’s a case of COVID in the school. Consequently, the kids and the policemen are quarantined in the school, which resembles a prison ‒ the children are the prisoners and police officers (naturally) are the guards. All the kids feel like no one is telling them the truth surrounding the pandemic and their solution is to call President Trump and tell him about the shooting and the possible vaccine in their town.

The President is, of course, presented in a ‘great light’. He admits he won’t do anything to help the kids and goes on and on about his annoyance with the Mexicans. Realizing that there’s no one to help them, the children decide to break out of school and the cops start to hunt for them while killing some of them. Some of the kids make it to ‘Build-A-Bear’ to save Butters (who’s sick due to the lack of ‘fun time’), but the police find them there. Just before the policemen are about to kill them, Randy interrupts and gives back the pangolin he stole. The episode ends with Trump appearing and burning the pangolin, because, well… he wants the pandemic to go on.

One can always rely on South Park for a politically incorrect view. And in a way, despite many people’s opinions, this might be a good thing. It’s useful to have something keep you grounded and show you things from a different perspective. This is exactly what the new episode is doing. It humorously provides a worldview, which I think we all need right about now, considering we all have no idea what the fuck’s going on in this pandemic.

The trailer provides a glimpse of the episode and is a great preview of the new release. Comedy Central released the new trailer and it served exactly what we all expected ‒ a necessary discussion about the ‘2020’ issues and the way the characters deal with them.

During the 47 minutes, we observe Randy handling the COVID-19 problems that surround him and all the rest of the South Park citizens. A refreshing glimpse is implemented through the kids and their adjustment to everything new in their routine.

The brilliance of South Park is that it manages to find the right balance. Just when you think it’s all fun and games, you watch the Pandemic special episode and see the scenes of the kids in school. They’re surrounded by plastic barriers and are figuratively robbed of their childhood. This is heartbreaking to see because all us millennials share some incredible memories from our childhood (however rough we claim it was). Seeing how today’s kids will never have some of our experiences should force us to rethink. And this is where South Park comes in.

South Park creators Trey Parker and Matt Stone are the writers and executive producers of the special. The Pandemic Special episode aired on Comedy Central on Sept. 30. 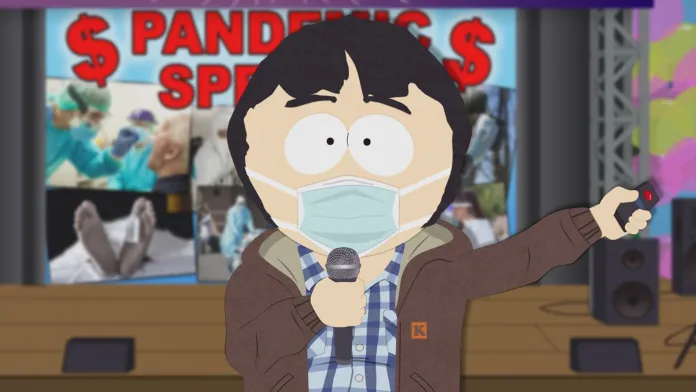