If you want to find out everything you need to know about that life-sized cardboard cutout of Ana de Armas and why it ended up in Ben Affleck’s trash, keep on reading. 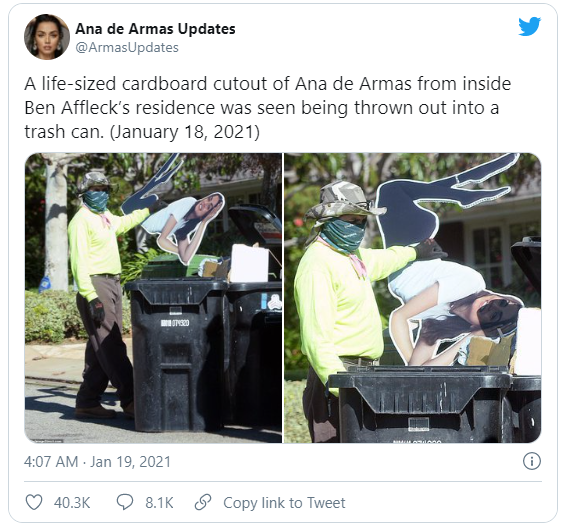 There’s this photo going around the internet of Ana de Armas’ cardboard cutout being thrown out from Ben Affleck’s residence. The shot started circulating in social media only hours after People magazine published about the couple’s breakup. Because it was so ridiculous (and we’re all feeling very low right now) the image resonated with a lot of people online and it showed.

Actors are after all just people like us. Nevertheless, sometimes when misfortunes occur in the life of celebrities a lot of people consider it not only sad but somehow also humorous.

Naturally, there is a story behind the cardboard cutout. At the beginning of June last year the actress Ana de Armas placed it on Ben’s lawn because she wanted to mess with the paparazzi. Like many of us after a split from our SO, Ben probably wanted to prevent looking at his ex’s face every day and therefore decided to let go of the cardboard image of her. Moreover, some people on the internet are convinced that the guy wearing a mask who’s getting rid of the cutout is the 48-year-old actor’s brother. (The reasons for this are that Ben and his bro (Casey) look a lot like each other, especially when it comes to their eyes.) I mean the least a brother can do after a breakup is put the ex-girlfriend’s stuff in the trash, right?

The image made a lot of people feel like they can relate and it soon became a meme. This almost forces us to think of the rest of Ben’s ‘‘amazing’’ life moments that turned into a meme and made us laugh plenty of times. A lot of us probably shared those GIFs with our friends with the simple message “mood”.

Remember when the “Batman v Superman: Dawn of Justice” actor summed up the entire year of 2020 simply by dropping his Dunkin Donuts and looking super sad/confused about it? Apart from all his movies, you might associate Ben with all the photos of him smoking in different places looking very pissed off and miserable. Don’t we all feel like Mr. Affleck? Let us also not forget him giving zero fucks when he created the best coronavirus meme by smoking while a face mask covered only his nose. There was also the time when Jennifer Garner’s ex-husband was photographed at a beach with a huge tattoo on his back. When asked about he said it wasn’t an actual tattoo and mentioned that he only did it for a movie. Later on, however, it turned out that the tattoo was very real indeed. What’s up with that? 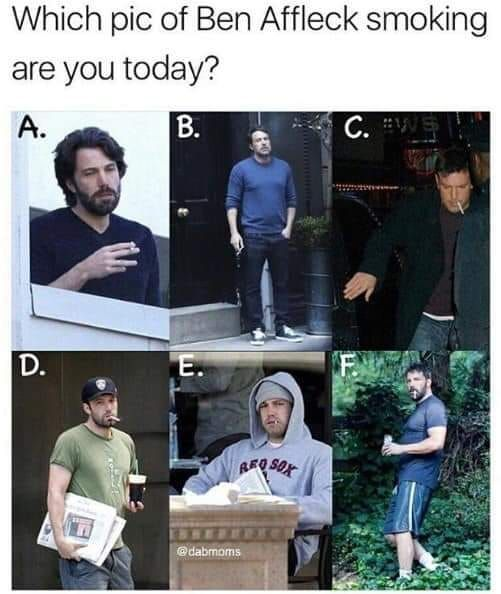 First and foremost, however, Ben stands out as a crucial internet phenomenon with his most iconic and funniest moment so far ‒ the ultimate meme. It all happened back in 2016 when he was starring in “Batman vs Superman: Dawn of Justice”. The actor was at an interview which aimed to advertise the movie but he looked super distracted, tired, lost and very quiet all at the same time. Ben was with his co-star (Henry Cavill) and didn’t seem like he wanted to engage in the conversation at all. A wise man on YouTube had the brilliant idea of adding the song “Sounds of Silence” by Simon & Garfunkel to the video of the actor’s behavior. Quickly the meme community worldwide went crazy about it and the rest is history. A year later Affleck was asked about his experiences surrounding the movie and he responded: “It taught me not to do interviews with Henry Cavill where I don’t say anything and they can lay Simon and Garfunkel tracks over it. That’s one thing I learned.”

The “Gone Girl” actor is most of all a very genuine person who’s gone through a lot of difficulties in his life. He’s battled alcoholism and a heavy public divorce. He’s also been in and out of rehab and has been vocal about his mental health issues.

Last year the actor shared with the New York Times: “People with compulsive behavior, and I am one, have this kind of basic discomfort all the time that they’re trying to make go away. You’re trying to make yourself feel better with eating or drinking or sex or gambling or shopping or whatever. But that ends up making your life worse. Then you do more of it to make that discomfort go away. Then the real pain starts. It becomes a vicious cycle you can’t break. That’s at least what happened to me. I drank relatively normally for a long time. What happened was that I started drinking more and more when my marriage was falling apart. This was 2015, 2016. My drinking, of course, created more marital problems.”

Even though Ben faced a lot of challenges, he did it in his own legendary way. We, however, only laugh at the memes because we don’t view them as something bad happening to a normal person. Instead, for us, it’s become this hilarious series of events happening to a popular wealthy Oscar-winning individual. This is exactly why we don’t feel bad for him. Sad Ben is not just a meme, people! It’s a real guy!

In 2018 Naomi Fry expressed her opinion about the actor’s tattoo in The New Yorker: ‘‘His gut is pooching outward in a way that, in a more enlightened country like, say, France, would perhaps be considered virile, not unlike the lusty Gérard Depardieu in his prime but, in fitness-fascist America, tends to read as Homer Simpsonesque.” She added ‘‘The image suggests not just the fall of Affleck but the coming fall of man. There is something about this exhausted father that reflexively induces panic. We’ve been living in a world run by Afflecks for so long, will we even know ourselves when they’re gone?”

Maybe Fry is right. We usually see middle-aged rich white guys (like Ben) lead the parade and now, here is this strong male who is simply done with everyone’s shit. It’s unusual for us as a society to witness one of the strong ones lose the power. The “rich white male” clique shrinks in size but it’s still funny online perhaps because they’ve always been on top and now they’re being humbled. Maybe we just like seeing that because it makes us feel better.

Ben is funny because he’s one of a kind and he doesn’t always fit in. That’s also why we relate to him. Especially in the harsh world we live in, we accept it more and more when someone shows us their clumsiness and their bad side. Affleck is a pro at this, even as an actor. In 2014 in “Gone Girl” he portrays a wrongly accused man who has a “punchable face” and in 2020’s “The Way Back” he’s a “grieving alcoholic basketball coach”.

We laugh at Ben, but we also feel bad for him and his small misfortunes that entertain people online. He’s great because he makes us relate but he also brings a smile through his memes. Whether he’s dropping his coffee, zoning out during an interview for his badly reviewed movie, or getting rid of an ex-girlfriend’s cardboard photo we’re here to love it. He’s unique and entertaining and that’s enough for now.