On October 16, 2019, Volvo unveiled the XC40 Recharge, the first full-fledged electric car from the Swedish brand, and the first Volvo model in its newest Recharge range. As expected, the crossover received an all-wheel-drive transmission, providing a range of 400 km on a single charge. It is built on a dedicated modular platform that relies on an all-electric powertrain.

The XC40 Recharge is based on Volvo’s bestselling compact crossover XC40. It is the first member of Volvo’s new family of all-electric vehicles. The company says the new product represents a milestone in Volvo Cars’ history: the first electric car and the first Volvo to feature the latest Android-based multimedia system. 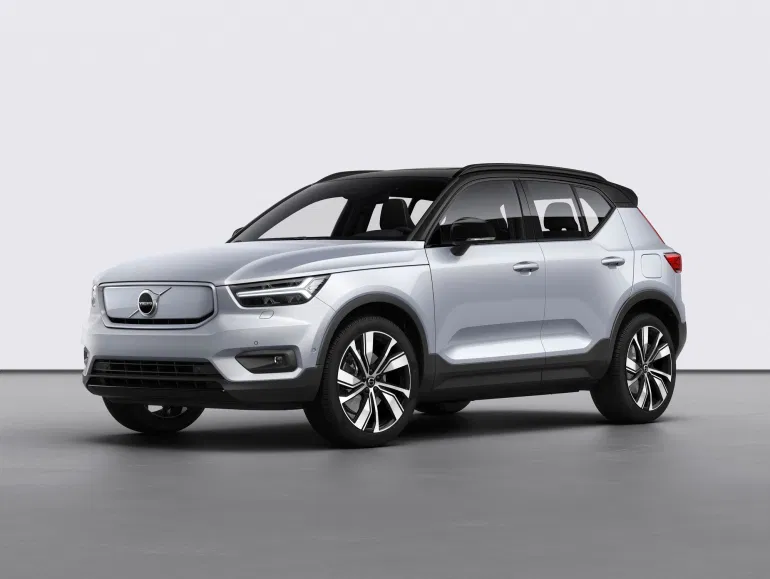 Over the next five years, Volvo Cars will launch a new electric vehicle every year. The company expects that by 2025, electric vehicles will account for half of its total sales and the other half for hybrids. Recharge will be the generic term for all Volvo rechargeable all-electric or hybrid vehicles. The launch of the XC40 Recharge P8 is an important step towards the ambitious goal of reducing carbon emissions by 40 percent by 2025. 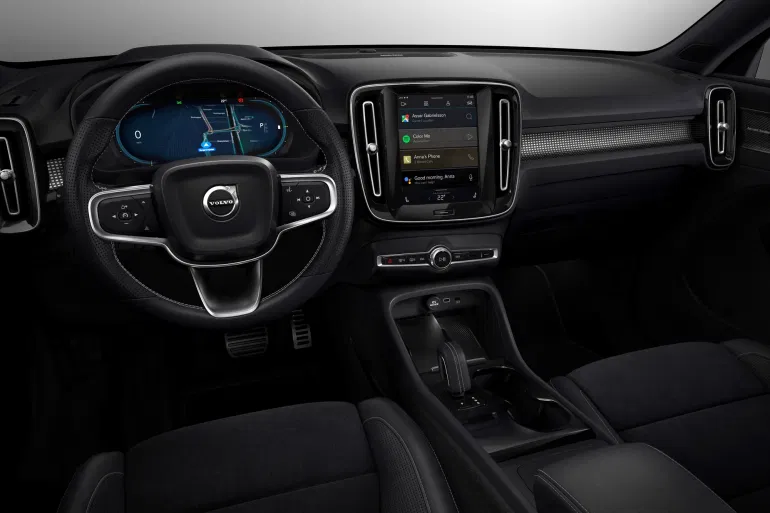 From the beginning of 2020, all visitors to the Volvo Cars website will be asked whether they are choosing a car from the Recharge family or another. To further stimulate the use of electric propulsion, customers will receive a full year of free electricity with every hybrid vehicle in the Recharge family by reimbursing their average electricity consumption over that period.

“We have stated on numerous occasions that Volvo Cars sees its future as electric,” comments Håkan Samuelsson, President, and CEO of Volvo Cars. “Today we are taking another important step towards it and presenting to the public the all-electric XC40 and the new Recharge family of cars.” 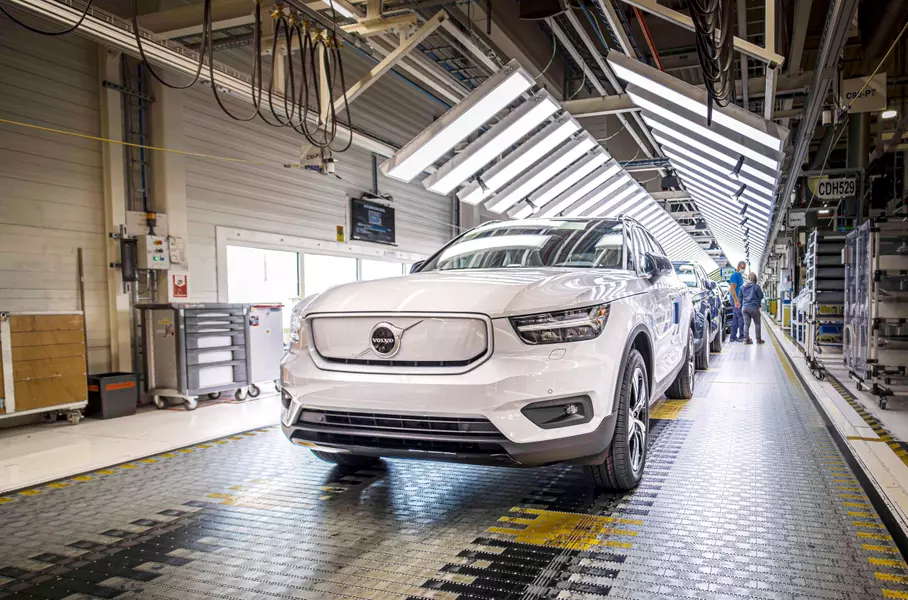 The new electric car “Volvo” received a 78-kilowatt battery providing a range of up to 400 km (according to the international driving cycle WLTP), all-wheel drive with a total capacity of 300 kW (one 150-kilowatt motor on each axle), an 11 kW on-board charger and the ability to replenish the energy supply from fast-charging stations with a capacity of 150 kW (80% in 40 minutes). The maximum speed of the crossover is 180 km/h, it can accelerate to 100 km/h in 4.7 seconds.

Building on the superior safety standards of the original XC40, Volvo Cars’ safety engineers have completely redesigned and reinforced the front end of the vehicle to include the absence of an internal combustion engine. The new XC40 Recharge P8 fully meets Volvo Cars’ safety requirements and offers the highest safety for driver and passengers like any other Volvo.

The battery has a protective cage built into the center of the body. Placing the battery in the floor also lowers the vehicle’s center of gravity, improving roll-over stability.

Thanks to an innovative approach to functionality, the SUV’s interior offers plenty of storage space ‒ not only in the boot but also in the doors and under the seats, for example. Due to the absence of an internal combustion engine, the driver also has additional space under the hood, in the front trunk.

The Android-based entertainment system is fully integrated with Volvo on Call, a digital platform with online services. With it, plug-in hybrid drivers will be able to track the use of the electric driving mode.

Volvo Cars expects significant demand for Recharge vehicles and will triple the production of electrified vehicles to meet this demand. Starting next year, the company will compile a selection of popular models of the Recharge family according to the designers’ Choice, as well as significantly reduce the delivery time of cars. Volvo Cars is aiming at plug-in hybrids to account for 20% of sales in 2020. 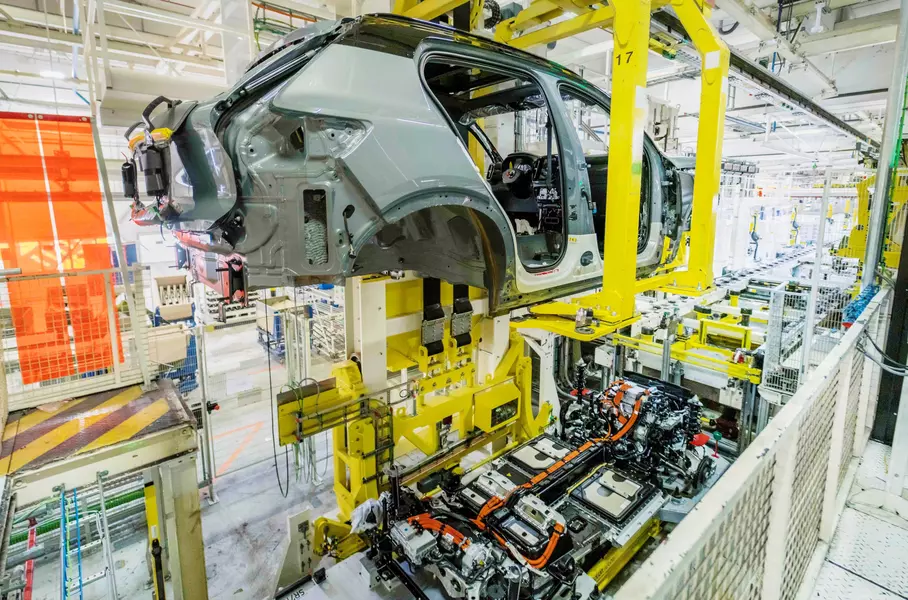 Demand for the XC40 Recharge P8 is very high ‒ all cars due to be built this year have already been sold, while the model remains open to order. The first vehicles are scheduled to be delivered to customers in Europe at the end of October.

Serial production of electric vehicles began after the end of the preparatory period, during which the plant in Ghent, Belgium, assembled a limited number of prototypes of the XC40 Recharge P8. This process, as a standard procedure for every new Volvo model, aims to optimize production flow and ensure the uncompromising quality of every car produced. All personnel involved in the assembly have also been fully retrained in safe construction.

“Today is a significant milestone for Volvo Cars and all employees at the Ghent plant,” says Javier Varela, Senior Vice President, Production and Logistics, Volvo Cars. “As we continue to electrify our lineup, the Ghent plant is becoming a true pioneer for our global production network.”

A Recharge version is available for every Volvo model, from the XC40 compact crossover and 60 series vehicles to the XC90 flagship SUV. Volvo Cars is the only automaker on the market to offer a plug-in hybrid option for every car in its range.

The XC40 Recharge and the entire Recharge family provide real proof of an ambitious new climate change program, which was also presented at the launch. It consists of a series of concrete practical steps, reflecting key provisions of the Paris Agreement, to achieve Volvo Cars’ ambitious goal of becoming a climate-neutral company by 2040.