We’re all excited to see what Conor McGregor comes up with next. He’s one of our favorite celebrities to keep up with and he’s been crowned as the highest-paid athlete in all sports this year. And in classic Conor style, he made sure to brag about how much fuck-you money he’s got.

The last thing Conor did to get his fans’ attention was the purchase of a $3.6 million Lamborghini yacht (fyi, only 63 other super-rich people have got one). 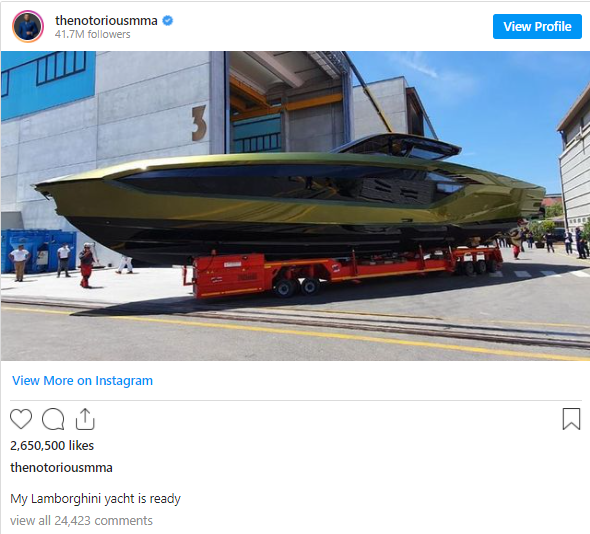 The Irish fighter’s purchase is a Lamborghini Tecnomar (also dubbed the “supercar of the sea”) with 4,000 horsepower, motorized by V12 engines, which are super heavy (think around 24 tons) and long (around 63 feet). The water vehicle can get up to 60 knots or almost 70 miles per hour (or around 112.65 kilometers per hour).

Naturally, the $3.6 million McGregor the Notorious paid excluded the upgrades but it’s safe to say he went for some extras after he received it (reportedly costing about $500,000). The color of his very own (and first) “supercar of the sea” was almost the same green as the bottles for his Proper No.12 whiskey. His whiskey venture is also the main reason he got to be number one on Forbes’ highest-paid athletes’ list for this year.

Only a day before the new Lamborghini was delivered, Conor shared a photo with a rather straightforward caption on trusted Instagram, directed towards people judging him after his second loss in a row to Dustin Poirier (where Conor broke his leg at the 5:00 of the first round in their trilogy fight). The caption simply said: “I wipe my rich ass with your feelings about my work. I feel nothing for you bums. Nada!”

Right now, McGregor is regaining his strength from the more than three-hour-long surgery to put a rod into his leg so the bones could be stabilized (after he shattered his tibia as well as his fibula in the latest event with Dustin ‒ UFC 264).

Even though Conor’s a former two-division UFC champion, he’s now going to have to take it easy. He’s shared that he anticipates using the crutches for around six weeks after the fight, however, it’s probably going to be around a full year (maybe even more than that) before he could go back out in the ring. The good thing is that even right after the fight, everyone was positive Conor will make a “full recovery”. Conor is also scheduled to appear in his post-leg-break comeback in a wheelchair match with impressionist Al Foran (he’s famous for impersonating Conor). The money from the fight is going to charity and Conor’s already back in the gym. How soon is that? Most people thought that the fight would happen sometime in September, but it probably won’t be until later in the year. The match will be a part of comedian Stevo Timothy’s (real name Steven Goggins) wheelchair boxing event in aid of the Irish Wheelchair Association. Stevo took to Twitter to announce the event, however, Conor also shared a post on Twitter explaining that his doctors wouldn’t recommend him to fight so soon and mentioned that he couldn’t put a date on it as of yet. He also hinted at having something cool planned for the fight, which made many believe he’d show up in a Lamborghini wheelchair. Here’s to hoping!

When the Irishman shared the first photo of the yacht, it came with the caption “My Lamborghini yacht is ready.” McGregor’s new toy is the second one to ever be delivered publically. He ordered it back in October of 2020 when almost everything was non-operational because of Coronavirus. Quite a wait for a yacht, right? We’d say it’s worth it, though. Since Conor is so rich, however, he opted for bringing his family on a day trip to The Italian Sea Group HQ, where he placed an order for the water vehicle. Additionally, because the fighter loves the number 12, his yacht was the 12th one to be produced. It’s ready just in time for the Dublin-born to enjoy the summer with his family.

There will only ever be 63 yachts like that and hence why, the price. The speedboat is the closest thing to a Lamborghini on water. Influenced by the Sian FKP 37, it contains a lot of carbon fiber and there’s an angular shape which can’t be mistaken ‒ it’s a Lamborghini after all.

On top of everything that’s happened to him last year, Conor has also opened recently his first pub (called The Black Forge Inn) in Dublin.

What do you think of Conor’s latest ventures and his loss to Poirier? Do you think his yacht is the coolest thing he’s bragged about? Let us know.