TWIFT | Sport | The Jake Paul vs. Ben Askren fight event raked up in more than a million pay-per-views

The Jake Paul vs. Ben Askren fight event raked up in more than a million pay-per-views

The Triller Fight Club card with Jake Paul’s knockout domination over Ben Askren (36) is going to be remembered as the event that brought in one of the most impressive numbers of pay-per-views in 2021 (and final numbers are yet to be calculated).

The event included four boxing matches on the main card and sold more than one million pay-per-views. As reported by MMA Fighting, at the end of the day the total pay-per-view sales are probably going to amount to anywhere from 1.2 to 1.6 million buys. Fascinating, right? Other promoters should be taking notes.

This is a huge amount for a rather new promotion releasing an event, especially because Triller has only had one other event before this one and it was Mike Tyson coming back to the ring for an exhibition match against Roy Jones Jr. (which happened back in November of 2020).

There was so much hype around the Jake Paul vs. Ben Askren fight and naturally, the pay-per-view sales showed for it and jumped on the bandwagon as the event was trending on Google and pretty much every social media platform out there.

It’s a known fact that there’s not a lot of pay-per-view events that can bring in one million buys and that’s the reason why this event is viewed as a huge breakthrough for Triller. It is also necessary to consider the social media platform that advertised this massive event, which also included musical appearances from The Black Keys, Justin Bieber, Snoop Dog, Ice Cube, Doja Cat, Saweetie, Diplo, and Major Lazer (oh, and Pete Davidson was there too). Quite the line-up, right? No wonder so many people tuned in to watch.

When it comes to 2021, the recent fight of Conor McGregor vs. Dustin Poirier was as good as it could get in terms of pay-per-view numbers since by all accounts it raked up around 1.6 million buys all over the world and 1.2 million in the United States. (The highest selling card of all-time is still UFC 229, which featured McGregor in the main event against Khabib Nurmagomedov, while the second-highest card of all time was UFC 202, which presented McGregor and his revenge against Nate Diaz. People love watching McGregor and now they’re digging Jake Paul too.)

From what we know so far, the Triller card with the headline Jake Paul vs. Ben Askren should at the very least equal the numbers from the United States, however, it might be weeks until the finalized calculations are counted and released.

And if you’re excited to see what Triller has to offer soon, the next big Triller event is scheduled for June 5 with Teofimo Lopez defending his WBA, IBF, WBO, and Ring lightweight titles against George Kambosos Jr.

Also, here’s a video of the post-fight interview with Ben Askren.

What happened at the Paul vs. Askren fight is that Paul (24) faced off against the ex-MMA fighter Ben Askren and knocked him out in the first round. Paul knocked Askren down, and though Askren wanted to continue, referee Brian Stutts waved off the fight. After the fight, Askren tweeted, ‘‘Sorry world :(’’

Many people on the internet took the whole match as one big joke, and that’s when the memes started pouring in. Here are some of the best ones: 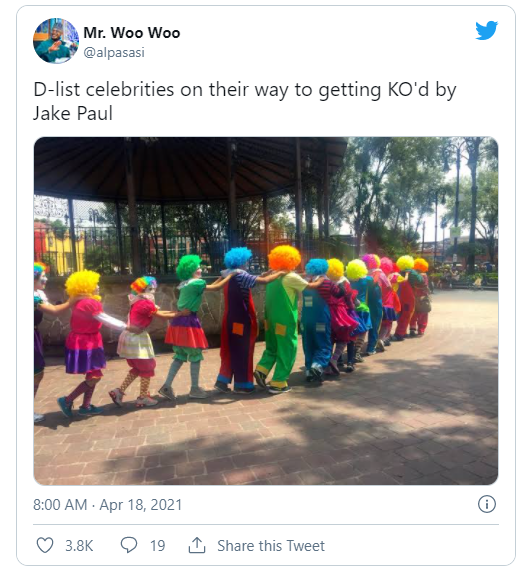 Some tried to defend Jake Paul. One Twitter user wrote “Wtf do people downplay the people Jake Paul fight? Stop acting like Ben wasn’t an equipped opponent he’s an Olympian, great MMA fighter ‒ pretty much an elite athlete. Even Nate was an equipped opponent, just accept their defeat wasn’t b/c ‘They were washed up or out of shape.” and sports journalist Stephen A. Smith wrote: “See, this has to stop. @jakepaul is not some scrub. He’s a pro now. Askren, even though he’s a @ufc fighter, is a grappler. Not a boxer. So why was he even in the damn ring? From now on, Paul needs to fight an actual boxer. He’s gonna hurt any non-boxer.”

Another thing that bothered people was how long the fight was. And of course, we made memes about that too. Fans paid $50 to watch the fight and had to wait more than two hours, through a lengthy undercard and numerous musical interludes, for Paul and Askren to get into the ring only for it to end so fast. 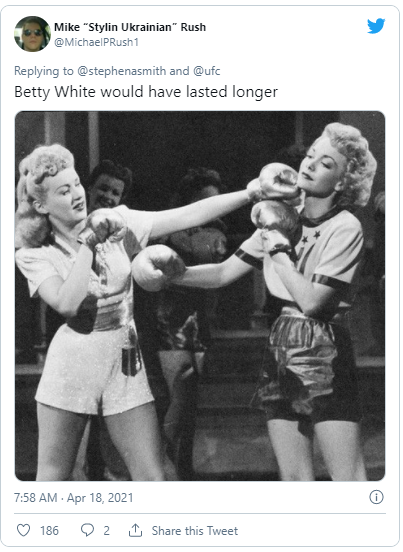 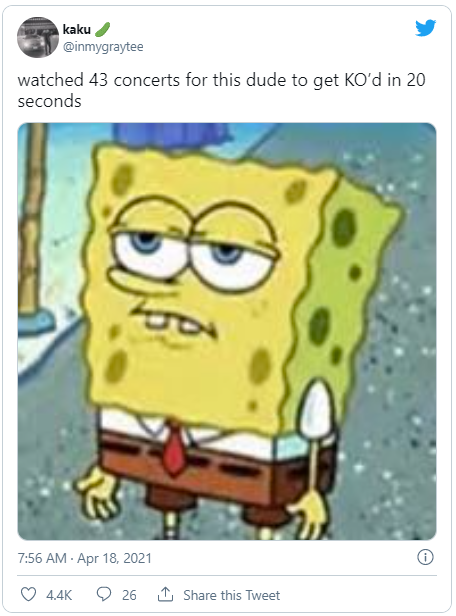 There was also the topic of Snoop Dogg and UFC President Dana White. After White reportedly bet a million dollars that Paul would lose, Snoop Dogg urged White to double that bet. When Paul won, Snoop Dogg, who was at the fight, screamed out ‘‘Where’s my money at? Dana, where my money at?’’ 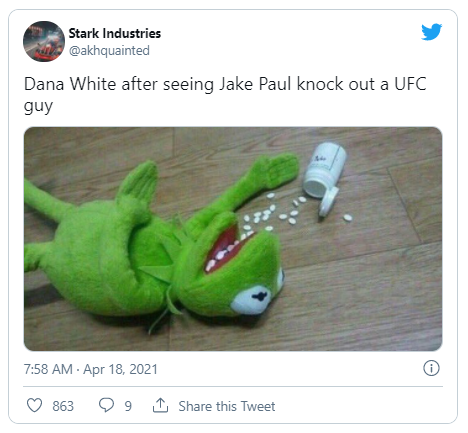 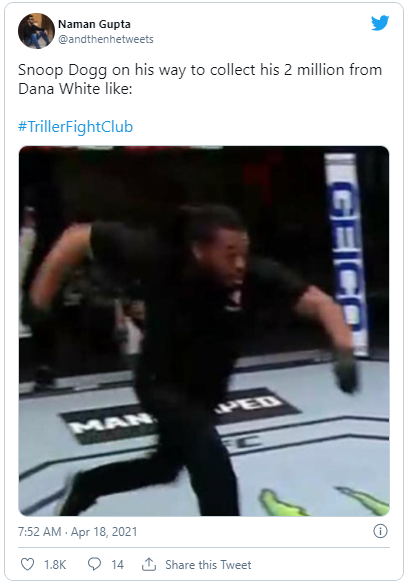 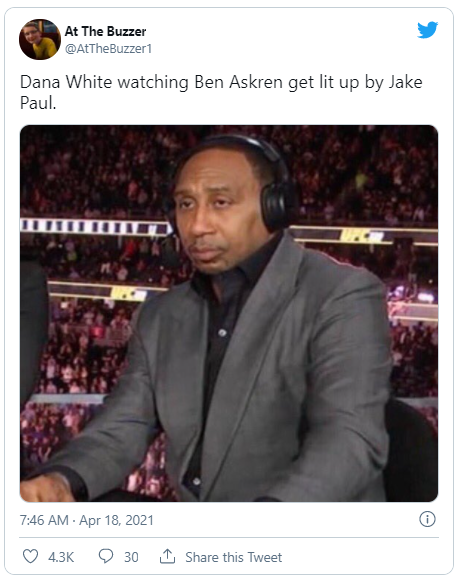 As for Paul, after his victory he tweeted “HAHAHAHAHAHAHA!!!” and following up a report that Askren won’t fight again with “WHO SHOULD I RETIRE NEXT?” 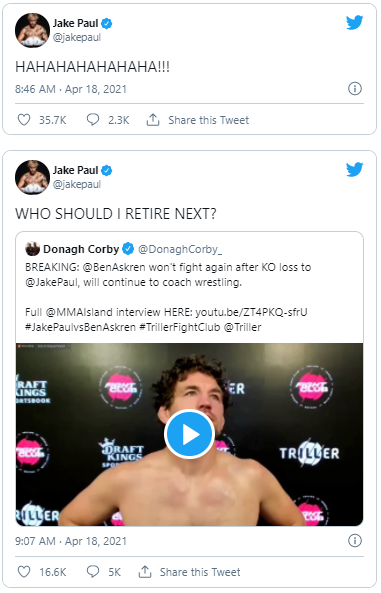 Jake won the match against Askren in the very first round and it lasted less than two minutes. The YouTube star says the fight raked a mega $75 million just in PPV buys. That’s why he posted a pic on Instagram flashing a load of dollar bills. 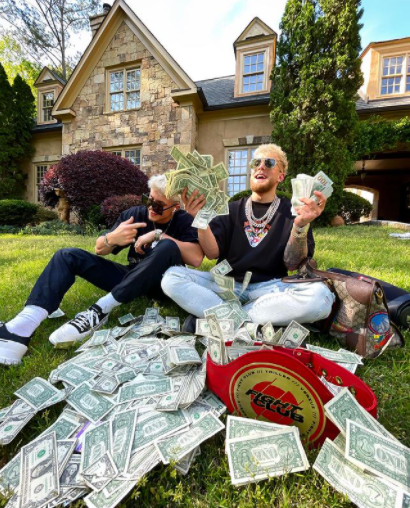 After the fight, he said: “I told y’all I was gonna do it in the first round. I told y’all I’m a real fighter. It’s been four months, I’ve been in training camp every day. I deserve this s-t. I don’t know how many times I’ve gotta prove myself that this is for real.” Paul landed a simple one-two over the top and left the retired UFC fighter unable to continue in the eyes of the referee. Jake dedicated the win to his bodyguard Shamir “Shadow” Bolivar, who passed away earlier this month. “This is for Shadow, my security guard, who passed away 10 days ago,” said Paul. “He told me I would knock him out in the first round. He said he had a vision, a dream.”

“This has been the hardest 10 days of my life. I had to hold it together to keep it going. And I’m just honored to be here.”

However, many boxing fans are not happy with the opportunities Jake is getting left and right. “They’re making a mockery of boxing, OK?” Claressa Shields, two-time Olympic gold medalist and multiple-time world champion who herself is preparing for an MMA debut in June, told TMZ. “I just say that because there are so many fighters who deserve to be on that platform under Mike Tyson and Roy Jones that did not get that opportunity… Jake Paul is making his money, he’s doing his thing. But stay away from us real fighters.”

But some don’t share the same view. “Listen, my ego says so many things, but my reality is they help boxing so much,” told Mike Tyson reporters after his comeback fight against Roy Jones Jr. “Boxing owes these guys, they owe these YouTube boxers some kind of respect. They should give them some belts because these guys make boxing alive. Boxing was pretty much a dying sport. UFC was kicking our butts, and now we got these YouTube boxers boxing with 25 million views. Boxing’s going back. Thanks to the YouTube boxers.”

“Anything that promotes boxing, anything that brings new eyeballs to the sport ‒ new interest, new enthusiasm ‒ has to be supported,” told ESPN Mauricio Sulaiman, president of the World Boxing Council (WBC) sanctioning body.

The beginning of the current ‘crossover’ revolution dates back to August of 2017 when Conor McGregor fought Floyd Mayweather. The fight was far from competitive ‒ Mayweather won his 50th and last fight with a TKO in the 10th round ‒ but earned both fighters more than $50 million.

There’s also a talk about a superfight between the current UFC heavyweight champ Francis Ngannou and lineal heavyweight boxing champion Tyson Fury. Ngannou is sure he can outbox Fury but Fury thinks Ngannou is “easy work”.

While prizefighting and popularity have always been amazing benefits of professional boxing, Paul vs Askren could further boost the involvement of celebrity boxers and crossovers.

Additionally, after his win over Askren, Jake Paul has challenged UFC fighter Kamaru Usman. “Challenge accepted,” said Paul. “Usman, if your boss Dana gives you permission to box me and make more money than you ever have, let me know and we can lace them up. I promise it will be your biggest pay day.” Paul has also mentioned he’d like to fight another UFC fighter ‒ Daniel Cormier. Daniel sparked the feud and replied by saying he wants Jake to step into his territory and fight him under MMA rules.

There’s also a talk about a future fight between the YouTuber and UFC star Tyron Woodley. Another possible fight could be between Jake and Tommy Fury (Tyson Fury’s half-brother).

There is, nevertheless, one fight that Paul is heated about and that’s the one with Nate Diaz. “I think people will immediately write me off,” he said. “Even someone watching this interview right now is like, “Oh, this kid’s crazy. Nate Diaz is such a dog, he’s going to kill Jake, he’s out of his mind.” But they’re going to tune in and watch, right? It’s two massive names, and it would be a massive pay-per-view, and then when they see me obliterate him, their jaws are going to be dropped – they’re not going to know how to react. They’re going to think it’s rigged again. And at that moment in time, I’ll be undeniable to fight Conor McGregor, because I beat the guy that beat you, Conor. And the Jake Paul vs. Conor fight is a massive fight. I’m like, why wait? I don’t need to be in this sport forever. I’m not trying to get 100 fights. Let’s do the biggest fights right away.”

Whatever matches Paul is involved in next, they’re probably going to bring in a lot of PPV because let’s face it ‒ people love to watch this YouTuber fight.

Check out Jake’s YouTube channel, where he uploaded a lot of videos where he talks about the fight with Askren ‒ https://www.youtube.com/c/jakepaul/featured