Studio Psyonix announced its merger with Epic on the official website.The developers have assured the public that the project and the community will only benefit from such a move, as Psyonix will now join forces with Epic Games. The mechanics of the game will not undergo any changes, and the potential of the esports ecosystem will “grow significantly” thanks to Psyonix’s access to new resources.

“The success of the Rocket League would not have been possible without you, our community. Your loyalty, passion, creativity, and support have helped us become who we are today. We look forward to seeing you continue to help us over the years,” said Psyonix.

Details and amount of the transaction were not disclosed. 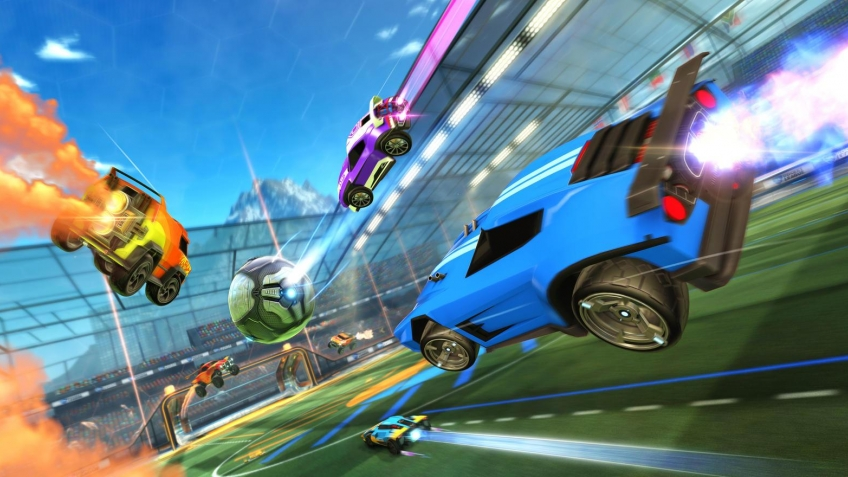 “Psyonix has always been part of the Epic family, and we’re glad it’s now official. We respect the work of the studio, which has put together a great team and built a great community around the Rocket League,” said Tim Sweeney, CEO of Epic Games.

The game is now available completely free on all platforms: PC, PlayStation 4, Nintendo Switch, and Xbox One. Besides, Rocket League has made it to the virtual shelves of the Epic Games Store. On the occasion of such important changes, the development team released the largest update in 5 years of the game’s existence, with major updates to the tournament and challenge systems, the introduction of cross-platform progress, and many other things. Also, Season 1 kicked off with a new Rocket Pass, Competitive Season, and Tournaments.

Epic Games and Psyonix, which were originally headquartered in the same state, North Carolina, have collaborated on numerous occasions. Rocket League contributors helped improve the development toolkit for the Unreal Engine. And its staff helped create Unreal Tournament 2004 and Gears of War.

The developers had previously warned about the transition of the game to a new distribution model, and now it has become free on all platforms ‒ PS4, Switch, Xbox One, and PC. For the Rocket League, you can still purchase add-ons with “cosmetics” and game currency.

As a bonus, everyone who has already played the Rocket League will be rewarded with Legacy status, which gives you all DLC released before the free update, as well as the additional Faded Cosmos Boost element. Sign “Est. 20XX” will reflect the year you first started playing Rocket League, and over 200 generic items will be upgraded to Legacy quality.

Earlier, the creators announced that the game would be removed from Steam and, in fact, kept their promise. From now on, new players can only download the client through the Epic Games Store, while veterans are allowed to continue playing using Steam.

However, the Rocket League changed not only the store but also the distribution model. The project has moved to Free-to-Play and is available for free to everyone. If you have purchased the game before, you will receive many gifts, including add-ons, a title, and exclusive items.

Until October 23, EGS will have a special offer ‒ everyone who adds Rocket League to their account will receive a discount coupon.

Rocket League reached over a million players playing concurrently the day after the game went free. This was announced by the head of the studio Psyonix Corey Davis, who took a screenshot of the game counter and shared it on Twitter. The exact number of players was 1,003,036.

July 7, 2020, marks exactly five years since the release of the Rocket League, and Psyonix has published an infographic on this occasion with player statistics ‒ both for the entire existence of the game and for the last year. 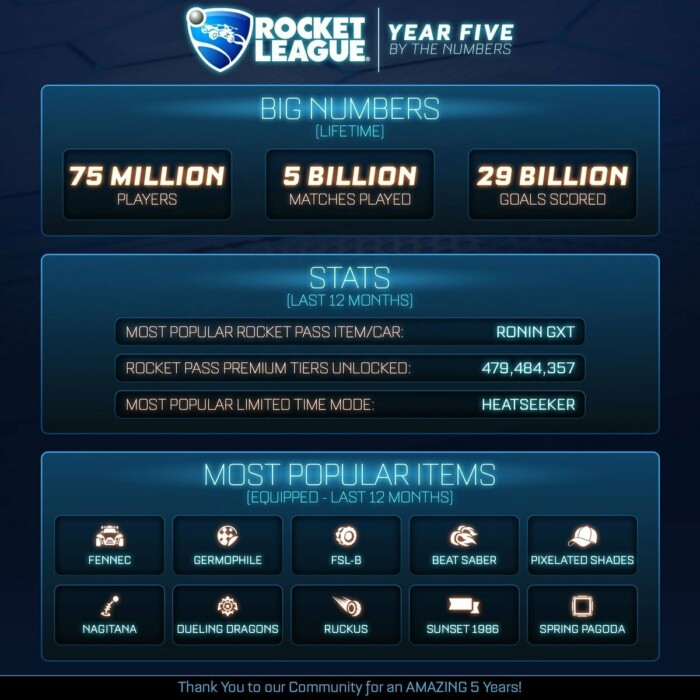 According to the developers’ calculations, 75 million users have played the Rocket League in five years, who have scored 29 billion goals in five billion matches.

The most popular vehicle in the game over the past 12 months has been the Ronin GXT, and the most requested mode is the Heatseeker.

Psyonix has also chronicled the development of the Rocket League, from launching on PC and PS4 in 2015 to its release on Nintendo Switch in 2017 and adding crossplay between platforms in 2019. 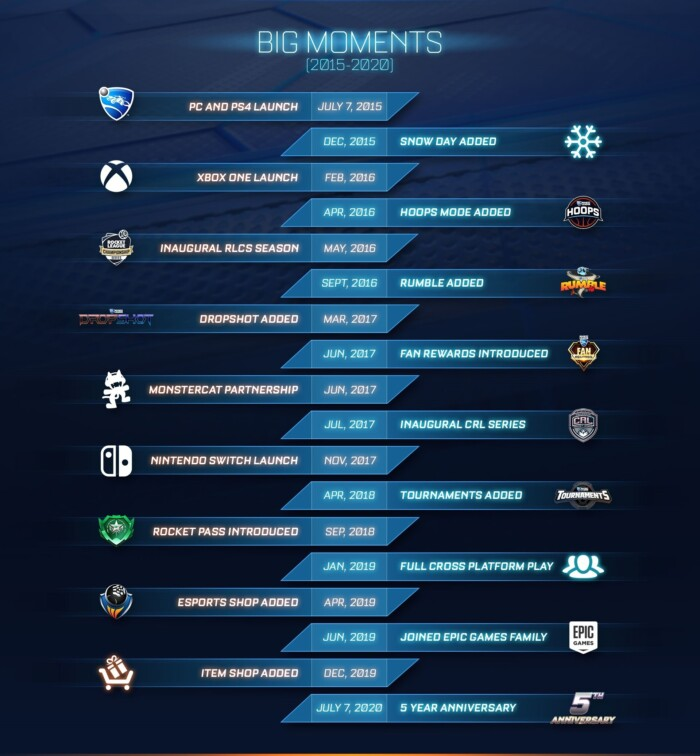