Minecraft is an all-ages game. If it weren’t, it would not have become the most popular game in the world with ‒ scary to imagine ‒ 200 million copies sold. But its spin-offs for some reasons are mainly aimed at children. Story Mode tells a completely banal story about the battle between good and evil and the power of friendship, and the new Minecraft Dungeons narrative recalls a fairy tale. 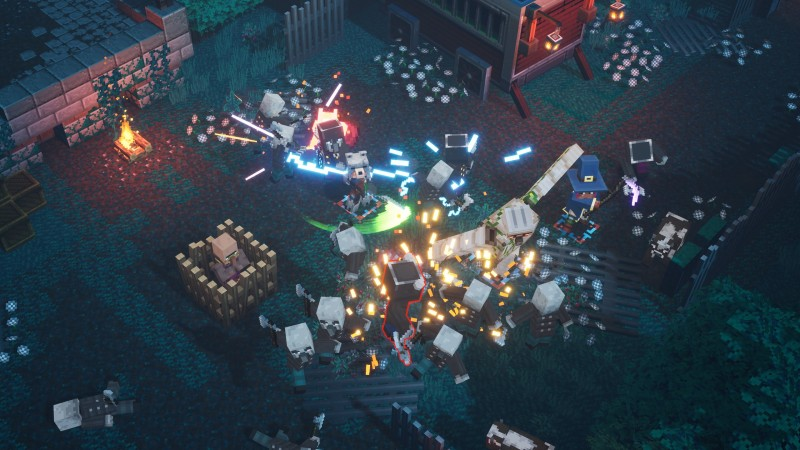 And it could be okay if the mechanics were as deep and varied as in Minecraft. Sadly, but they have chosen the path of maximum simplification, andthe game became both too primitive and surprisingly faceless.

If you haven’t heard about it, Minecraft Dungeons is a dungeon crawler about a group of heroes (from one to four, behind a single screen or online) who go to save the world from the machinations of the “Arch Illader”, who has got a powerful artifact. This is all you need to know about the plot: it is presented here only with short phrases in front of each level and is of no interest. There is no NPC at all. All attention is based on the gameplay.

The gameplay is pretty standard and generally unpretentious. We go through the procedurally generated levels (it’s difficult to even call them dungeons, most of the game takes place in the fresh air), and we fight off crowds of enemies. Many of them are familiar with the original Minecraft: creepers come up and explode, skeletons run back and shoot from a bow, endermen teleport. True, there are several new opponents. For example, knights with shields and golems of red stone, which lay mines everywhere. Equipment: melee weapons, bow, armor (with only one slot for armor), and three artifacts that give different magical effects. This can be an increase in speed, a healing aura, a wave throwing away enemies, a piercing beam, and so on. And at the expense of mana are the souls of slain enemies. For killing enemies the heroes get points that can be invested in enhancing passive bonuses on equipment (you can not choose these bonuses).

Three lives are given out for each stage: if all the heroes die, they will be thrown back a little and automatically resurrected. And with a multiplayer game, a fallen comrade can be raised “for free” by spending a few seconds on it. Otherwise, death has no negative consequences: the health of enemies does not recover, and you lose absolutely nothing, no experience, no loot, no progress. It is not what Minecraft needs.

The levels are quite diverse ‒ pumpkin fields, forests with witches, mines, ancient temples with traps. Maps, of course, are randomly generated each time, but there are few distinctions between different versions of each specific location. They are always linear, and there is always an arrow on the screen, carefully indicating where to go. Thinking in Minecraft Dungeons is not necessary at all.

Unlike Minecraft, where you could arrange all kinds of villains for your comrades, in Dungeons when playing together you can’t harm your allies, and even loot drops for everyone. Unless, general healing food can be stolen.

Minecraft Dungeons is hard to recommend to anyone other than children: it is extremely primitive. Almost all opponents can be defeated by the simple tactics of “hit and run.” Their varieties are few and they are pretty dull. Zombies running into close combat and skeletons shooting from afar are functionally no different from each other. You can only dream of “elite” monsters with special abilities in the spirit of Diablo III.

There are no quests, no class system, or at least some way to purposefully develop a character. Money is needed only to buy clothes from the merchants in the camp or a random artifact and skills, as you remember, are tightly tied to them ‒ there is not even talk about any builds. Outside your equipment, your hero is a dummy. 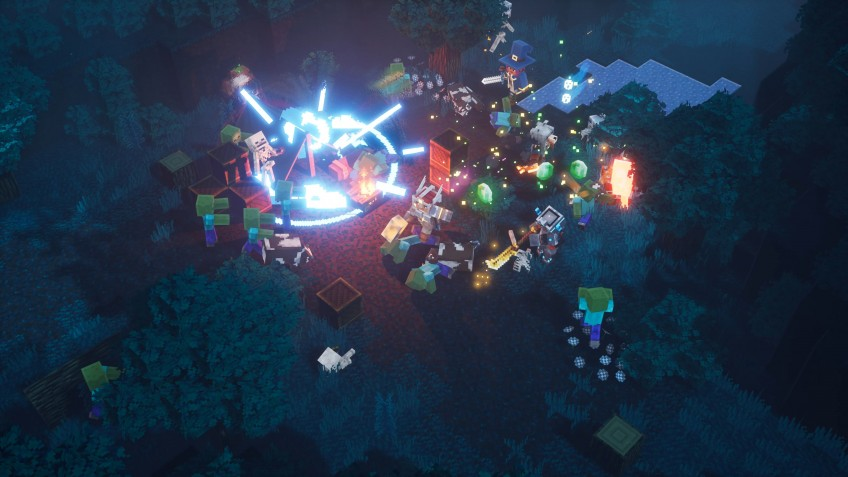 By the way, there are very few strong enemies from whom cool artifacts would fall. Secret places on the way to the end of the level sometimes reward the player with chests, but useful things rarely fall from them. Therefore, instead of exploring every corner and cutting out all the monsters to a single one, as in the best representatives of the genre, it’s easier to immediately run to the exit. Boring ‒ even a cooperative does not save.

Moreover, Minecraft Dungeons is not only straightforward but also short: only a dozen levels of 20-30 minutes each. Of course, any completed location can be cleared repeatedly ‒ the game has a smooth gradation of levels difficulty. If you wish, you can even go to hardcore with weak clothes at once ‒ but there is almost no point in this. New difficulty levels are added to the first locations of enemies from the last, increase the number of monsters and the frequency of their “enchanted” versions. Rewards must grow in proportion to complexity, but they are so rare and random that the motivation to grind clothes ‒ and play in general ‒ quickly disappears. It cannot be compared with the endless time that you can spend in the Minecraft. 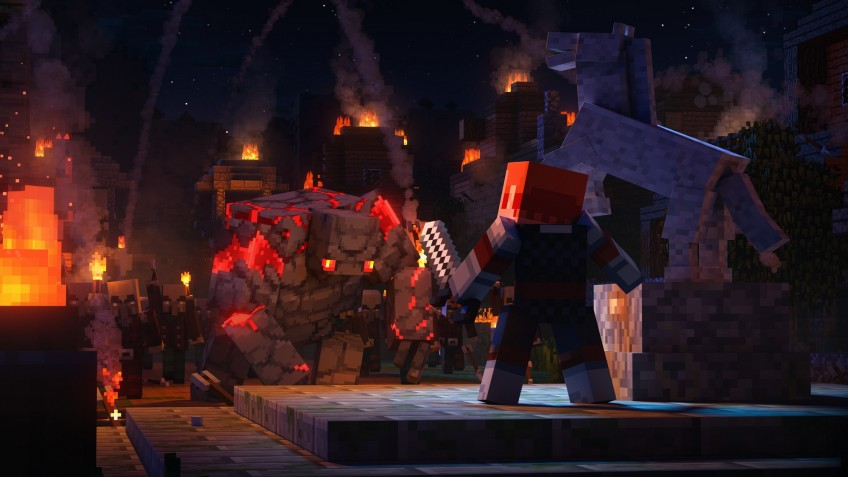 It is difficult to imagine that Minecraft Dungeons is able to interest anyone except the most unpretentious and young gamers. Although, there may be problems with this ‒ the children already have Minecraft. A game, in which, in addition to dungeons, there is also a huge scope for creative self-realization and unusual experiments ‒ that’s the most valuable for the younger generation. The creation of Markus Persson had many bright qualities, but the Dungeons did not inherit any of them ‒ except for the “cubic” style and recognizable monsters.

This is not about the “creative” component of the game (although the ability to customize your camp would be very appropriate), but about adventure. After all, Minecraft was largely about exploring dungeons: valuable resources were hidden in the bowels of the earth, so the players had to start searching for them. They were waiting for endless kilometers of caves, deep gorges, ancient ruins, and abandoned mines. Danger at every turn! Monsters could appear from any dark corner, a fall from a great height meant death, and lava destroyed not only the player but also his entire inventory. The stakes are always high, and all the risks cannot be predicted. Thanks to this unpredictability, Minecraft gave a memorable gaming experience even to those who were not interested in creativity. 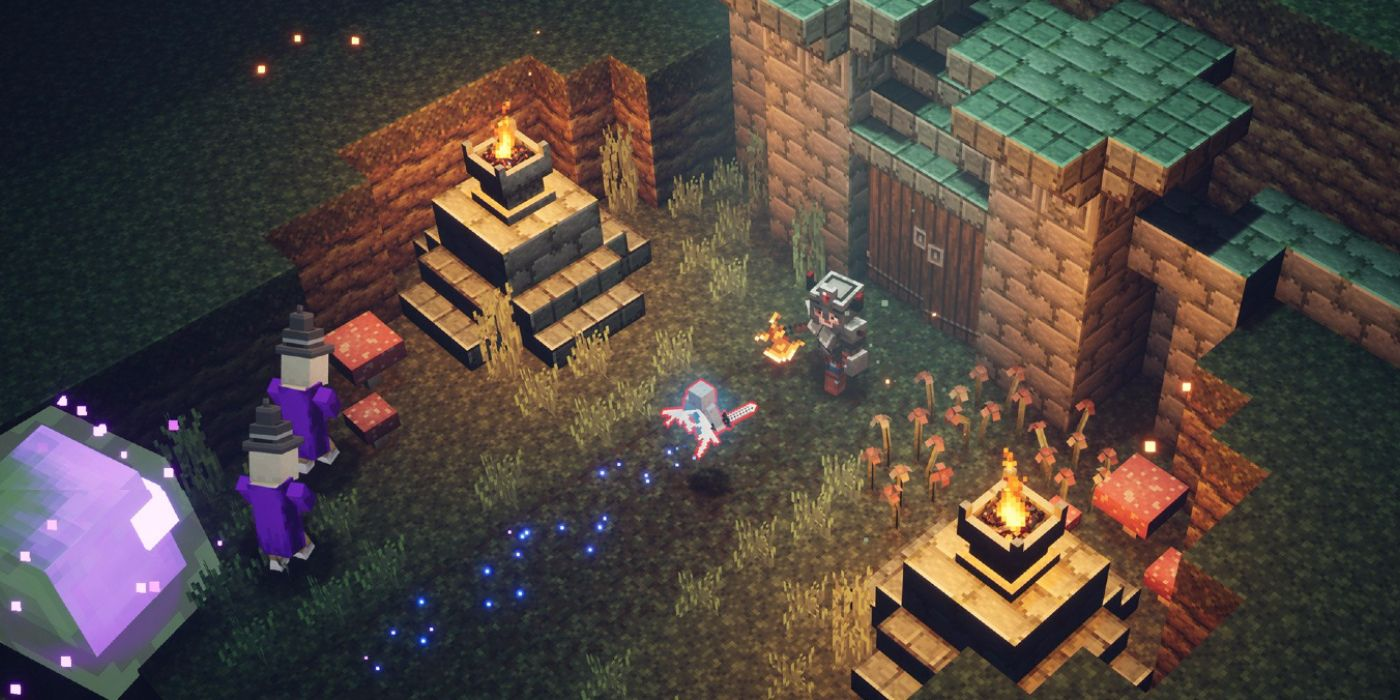 Dungeons are much more convenient to play from the controller: you can move and aim in different directions. WASD cannot be used for movement ‒ just click on the desired point.

In this case, the mechanics of construction in the original Minecraft was an important part of the study of dungeons. The “passed” areas became part of an orderly, settled underground kingdom, which was constantly expanding. Torches blocked the appearance of enemies, stairs and waterfalls provided exit points, a railway connected the player’s base with caves that had yet to be mastered. In the end, the destructible environment was also useful in battle: if you press it completely, you can block the spawn of enemies or flood the segments of the labyrinth with water. Or, better yet, lava. This is what Minecraft Dungeons needs.

And in Minecraft Dungeons you can’t do anything. Neither dig, nor craft, nor at least somehow interchange randomly placed cubes of scenery. Even the explosions of creepers pass without a trace. The levels run quickly and are just as quickly forgotten, leaving behind a couple of unnecessary gear. There is no whole world and plenty of space for expression too.

From gathering and crafting to being able to build and destroy walls, from using the environment against enemies to the need to light tunnels to deter monsters, almost any Minecraft mechanics would take root within the Dungeons. Without them, it became not only terribly boring but also faceless. It is a typical game under license, in which only the most superficial remains from the original source.

You can play Minecraft Dungeons, but you don’t need to: there’s absolutely nothing to offer the person who played any decent dungeon crawler. If you, alone or in the company of friends, want to spend hours exploring the full dungeon of monsters, then you have long made another game. It is called Minecraft. Without the Dungeons.